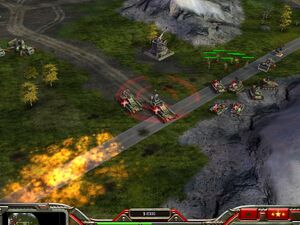 This basic setup on the northern road will work throughout the mission. Keep the Nuke Cannons force firing from Wave 1 through Wave 6.

"The GLA is a wounded animal, but they must not find a cave to regather their strength."

The GLA is on the run. The goal of this mission is to keep six waves of fleeing GLA units from escaping to the northeast and southeast. The beginning and end of each wave is announced. If even a single unit escapes, the mission is lost.

The first wave comes directly by your base, but the second through fifth waves will head further south. Troops must be maneuvered to that area and defensive structures will need to be built throughout that region.

The first five waves can lull you into a sense of false security, but the sixth wave will knock your socks off if you are not thoroughly entrenched. The GLA will attack simultaneously to the north and south on the final assault. 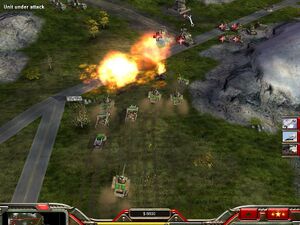 In Wave 6, the Nuke Cannon effectively thins out GLA units.

A War Factory cannot be built on this mission, but defensive structures, aircraft and infantry units can accomplish your goals. 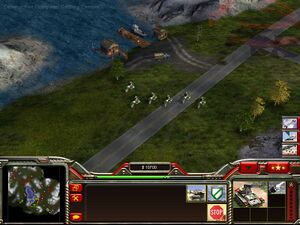 The first wave of Combat Cycles.

The first attack will come along the main road slightly to the south of your northern base. The first task at hand is to prevent the GLA Combat Cycles from zipping through toward the northeast.

Move your Overlords in position on the road on the other side of the Artillery Platform, backed up by your Gattling Tanks and Battlemasters. Upgrade the Overlords as desired. Have your Nuke Cannons force fire on the road ahead of these units.

Take both of your Troop Crawlers and empty them out on the road near your Gattling Tanks and place them in Guard mode.

Upgrade your Helixes, as desired, and move them toward the road also. Label them with a number for fast response.

Have one of your Red Guard capture the oil derrick by the base and one capture the Artillery Platform. Build two more Supply Trucks.

Build three Dozers. Have one stationed in a safe spot behind your troops and the other two moving further to the southeast.

Build eight Tank Hunters and have the Rally Point set at a safe place behind the Overlords.

As troops in Wave 1 approach, be proactive with your Helixes in destroying the Bomb Trucks first and then the other units. The Helixes will do most of the work on this round. There will be no Quad Cannons in this attack, so the Helixes can be set in Guard mode near the end of the attack if you are distracted with other duties.

During a lull in the fighting, load one of the Troop Crawlers with the Tank Hunters and the other with Red Guard and start heading toward the southeast, along with two of the Dozers. Construction of Gattling Cannons to the southeast can actually be started during the first wave.

This takes a bit of trial and error and is suitable for when you are restarting the mission for the nth time and definitely works on the Normal level of difficulty.

Start by upgrading one helix with propaganda tower and the rest with bunker upgrade. Fill up the helix having the bunkers with missile infantry.

By paying attention to the entry point of the GLA forces for each wave, station Helixes at the entry points itself as each wave is announced. These helixes should be with the bunker upgrade with missile infantry along with a few upgraded with propaganda tower. This horde is quite effective at taking out the forces before they get a chance to do too much damage. The mission is then reduced to continuously making and replacing helixes that have been brought down by the quad cannons. 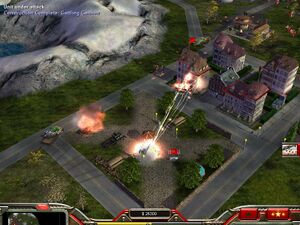 Your center of defense for Waves 2 through 6 can be built around these garrisoned buildings. Build Gattling Cannons upgraded with Mines on escape routes in case Battle Cycles zip through your defenses.

Wave 1 was pleasant enough, but this can actually be a dangerous thing, as it can make you feel complacent. It is necessary to continue strengthening the defenses until the final, climactic sixth wave.

By now you should have two Dozers and two Troop Carriers in the southeast area of the map. Slightly to the east of the fishing dock is a cluster of civilian buildings. Garrison your Tank Hunters inside one of these structures on the west side of this block of buildings.

Build two Gattling Cannons on the road passing to the north of these buildings and then a Barracks. Create more Tank Hunters and place them in the other westward-facing building.

Have two of your Red Guard capture the two oil derricks on the eastern side of the map. These oil derricks and the Supply Dock by your northern base will give you sufficient funds to complete the mission.

Important: Have your other Dozer start creating Gattling Cannons along the eastern escape routes. Upgrade all of them with mines. Throughout the mission, repeat and keep building out toward the group of buildings that your Tank Hunters are occupying. Repeat the same process on the northern area of the map where your initial units and base are located.

Wave 2 can be easily defended with a combination of your garrisoned Tank Hunters and your Helixes. Of course, keep those Toxin Tractors away from your garrisoned buildings!

This attack will merge into the second attack. It is a bit more vicious with the combination of Quad Cannons defending the Scud Launchers and can destroy a number of Helixes. Replace your Helixes as needed. Continue building Gattling Cannons and mining them along escape routes.

Start building a backup contingent of Helixes and place them at the east end of your southern defenses. Upgrade them as you see fit. Create a contingent of Tank Hunters and Red Guard in a safe location in case your forward defenses fall. Continue repairing your garrisoned buildings, and repairing and/or replacing Gattling Cannons that have been lost in combat. Fill up the civilian structures with Tank Hunters. Continue to build Gattling Cannons on escape routes and mining them. 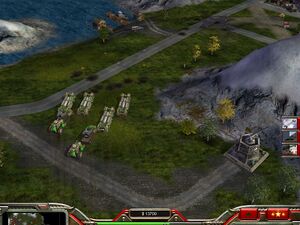 After the Battle Cycles approach in Wave 6, set Cluster Mines in the path of the oncoming Scud Launchers.

If you are properly prepared, Wave 6 is manageable. The most difficult part is dealing with the combined Scud Launcher/Quad Cannon combination that attacks the southern part of your base. 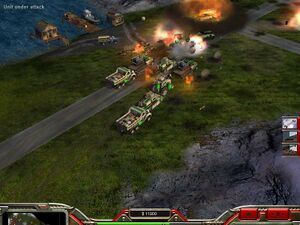 After the Scud Launchers are destroyed by the Cluster Mines, the Quad Cannons will race toward the garrisoned buildings -- it will be the last thing they do before going to hell.

The assault to the north will not have much of a punch if you have all of your previous units in place from Wave 1. Your Nuke Cannons should still be firing onto the oncoming path. Call in an Artillery Barrage right in front of your Overlords. With good timing, you will not even lose your two Overlords in the attack toward the north. 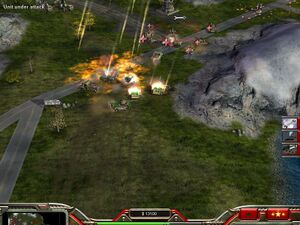 When the first round of Wave 6 approaches the north, send in an Artillery Barrage. You have a good chance of catching the second round of GLA armor dead center.

The assault to the south is more troublesome. Quad Cannons will hang back with the Scud Launchers unless they are lured forward. Your entire fleet of Helixes can be wiped out if you are impatient.

A simple way to deal with this issue is to lay down Cluster Mines in the Scud Launchers' path right before they approach your base. When a group of about six Battle Cycles zoom toward your base, this is a good signal to lay down the Cluster Mines.

It is also possible to bring down some of the Battlemasters and Gattling Tanks from the north to attack the Quads.

The mined Gattling Cannons behind your barracks may not even have to come into play, but they are a great backup plan.

Destroy all of the incoming sixth wave and the mission will be accomplished.