This is an introductory mission that can be quickly played. Deliver the GLA leader to the airfield to win the mission. 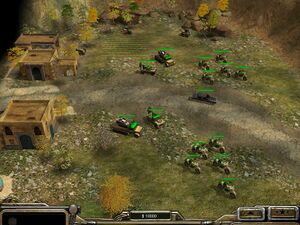 You start the mission with enough vehicles to power straight through to your GLA base. There is no reason to take shortcuts.

Drive across the bridge, destroy the Humvees and more Combat Cycles will join your group. Immediately power through the USA base. There is no need to take detours.

Keep going forward to arrive at a GLA base that is occupied by USA forces. Destroy these forces and move your GLA leader to the base. 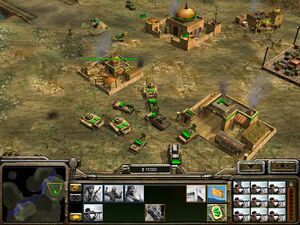 Build plenty of vehicles at your base to destroy the two Fire Bases at the USA camp.

Drive across the river with the vehicles you have remaining and destroy the Sentry Drones. This will give you enough battle experience for a promotion and two General's Powers can be chosen: Technical Training and Marauder.

Create a number of infantry and armored units that you feel is sufficient to fight through two Fire Bases and assorted USA units. The Toxin Tractors will help eliminate USA infantry.

Take your forces close to the USA base outside of the range of the Fire Bases and wait for the Paratrooper drop. Dispose of these units with your Toxin Tractors and Quad Cannons. 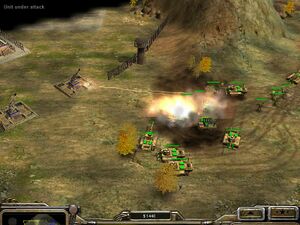 Dispatch the paratroopers before attacking the Fire Bases or you can get caught in a deadly cross-fire.

Attack in force the two Fire Bases and any other units in the area.

Drive the GLA leader to the airfield. It is not necessary to destroy the USA base.