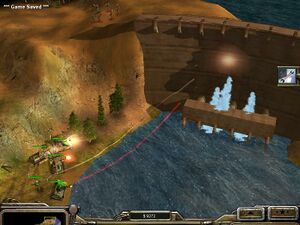 Blow up the dam to win this mission.

Overview: This mission is introductory in nature and very straight-forward.

The mission begins mid-cut scene and it is necessary for the player to finish destroying a Chinese base that is already in tatters. Try not to lose any vehicles unnecessarily as these vehicles can be taken to the next part of the mission. The best way to avoid losses is to immediately ram one of the Bomb Trucks (perferably one with a Bio-Bomb) into the mass of Chinese Red Guard troops approaching the scene. Move your Technicals a safe distance away so they are not blown up in the process. Avoid toxic spills as this can also destroy vehicles. Immediately disguise the remaining two Bomb Trucks as Battlemasters (before the last Battlemaster is destroyed). Dispatch any surviving Red Guards and proceed to destroy the Chinese base if you wish.

Before going to the Chinese Base, note that there is actually another way for you to quickly jump-start your economy before you destroy the Chinese base. Send one of your Technicals south, and you will find a GLA Base that your forces will move to after dispatching the Chinese base, (patrolling Rebels will mark its position.) As soon as you arrive, click on your Supply Stash and make an additional three workers, (one will already be gathering supplies and three others will be awaiting orders) While you wait, have another worker build an Arms Dealer and have the nearby barracks purchase the Capture Building upgrade. Take another, (or both) of the workers and move to the base's southern area and construct one, (or two, if you're playing on the higher difficulties,) Tunnel Networks. Then, once you are done, take a few of the patrolling Rebels back to the Chinese base and capture all the buildings. You can sell them, but I recommend that you use them against the Chinese.

After capturing or destroying the Chinese base, another cut scene appears and your leftover troops appear at a GLA base in the southwest corner of the map. If you've already constructing a sizable force, its quite thrilling to see your bustling base. Your assistant then informs you about a nearby village that has been "captured" by the Chinese "infidels" and that you must re-take the village. Your assistant will also inform you of a secret Arms Dealer operating in the hills and that he has expressed his desire to assist your forces. You then receive your objective: destroy the nearby Hydro Electric Dam which will dispatch your Chinese foes in a "flood of righteous anger."

To find the sympathetic Arms Dealer nearby go through your newly-constructed Tunnel Networks. You'll find a fork in the road, one leading to the village, and the other to the mountains. Follow the path leading to the mountains and it will lead you to a cliff overlooking your base. The Arms Dealer welcomes you with an offer about "home-made rockets for your tanks," indicating the Scorpion Rocket. Select the Dealer's Arms Dealer and purchase the pulsing Scorpion Rocket iocn. It takes some time, but eventually a stubby rocket will be mounted on your Scorpions' turrets.

Next, build a combination of Technicals and Scorpion tanks. Zip a Technical or two due east of the base to find the village. Destroy the Speaker Tower in the middle of the village and a large number of villagers will be converted to GLA Rebels. Garrison the Rebels inside the civilian structures to protect them from the tank attack that will immediately happen afterward.

Have your newly-upgraded Scorpions reinforce the villagers, then take ten or more vehicles to the northeast toward the Chinese base. Have the Rebels both from your base and the village join you.

The base can be easily destroyed, although it is not necessary to destroy it to win the mission. However, if you do destroy it, Chinese reinforcements will not be constructed there.

To finish the level, one way is to approach the dam with your tanks and destroy the dam. Be advised that if you follow this strategy, the units that destroy the dam will most-likely be destroyed from the flood of water. However, if you still possess the two surviving Bombs Trucks from the earlier attack and upgrade them with High-Explosive bombs, they should be able to destroy the bridge by themselves. (Just remember to send them one at a time so that they don't destroy each other with their own explosion.)

Another way is to take whatever Technicals, Scorpions and Rebels that are available at the base and go east to the village. Destroy the Speaker Tower and take your now larger fighting force toward the dam. Destroy all troops and tanks encountered. Run past the bunkers, if you see fit, or quickly destroy them. Then blow up the dam.

The third and easiest way to finish the mission is to find the canyon that leads around to the top of the dam. It is only lightly-guarded with a few Battlemasters and a number of Chinese infantry. If you have the Scorpion Rocket upgrade, this battle should be short. With the dam in sight, order your units to begin bombarding it. When its health drops below half, the dam will implode and release the river, which will destroy the battalions of Chinese tanks gathered around the river. Congratulions, you've just committed mass-murder and your soldiers cheer. Mission Accomplished.

Yet another secret: If you take a Technical across the bridge to the southeast corner of the map, you will liberate a large number of Elite Technicals. Be careful when you cross the bridge a second time, as if any Chinese tanks spot you, they will pursue you until they destroy you or if you destroy them.

Very simple strategy: You need to keep one of the Bomb Trucks for this. In order to get through the first part, ram the Bio Bomb loaded truck to the red guard horde, then clear the base as you see fit. Disguise one (or both) of the Trucks. Upgrade them with both upgrades to make sure. Move the Trucks through the valley and attack the Dam with them. BOOM! Instant kill on the dam. Enjoy the cutscene with Chinese units drowning.