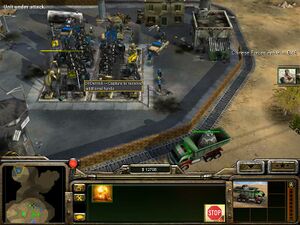 These derricks allow you to create a "well-oiled" fighting force

A standard strategy of slowly building up your base with occasional offensive strikes will lead to a disparaging war of attrition for the GLA. More resources are needed to win this war.

Your three trucks carrying the nuclear weapons can be used to explore the map without being attacked, since the traitorous GLA contingent do not realize you have captured these nukes.

A further note: It is not necessary to use these nuclear weapons to win this mission. Simply wiping out the rogue GLA base will suffice.

Build up your base in a straight-forward manner, making sure to research the Capture Building command at the barracks and choosing the Ambush skill as one of your General's Powers.

While building your base, send one nuclear truck to the far north of the map where you will find four oil derricks grouped together. Your nuclear truck will not be attacked.

Click on the Ambush command and then capture the four oil derricks. An overwhelming amount of resources will come your way, enabling you to build up a powerful strike force to take out the enemy base.

Fortunately, these oil derricks are so distantly located in the north, they will not be attacked. There is no need to send forces to defend them. 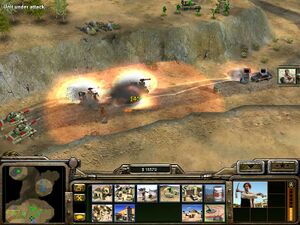 Having a few suicide bombers in the burned-out looking cars on standby is also a good strategy to take out the stragglers.

Reset these charges after they do their damage for the next Chinese attack.

Setting off at least one nuclear blast before your main attack on the rogue GLA base will help clear out a large number of enemy vehicles and troops.

The strategy of directly nuking the rogue GLA base and then capturing their buildings does not work well, as the base is so large that some troops will survive the blast, regroup and destroy your Ambush team before they can give you a foothold in the camp.

It is a pleasant experience and welcome change to have practically unlimited funds on this mission. 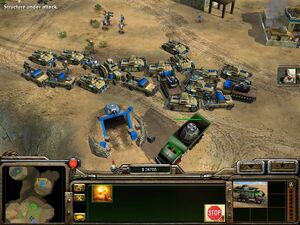 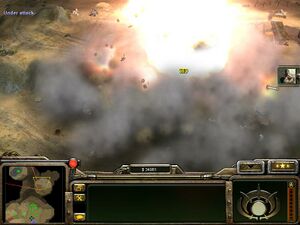 It is rather sad that, while it is not necessary to use the nukes to win, it can be won in about two minutes using them. Simply drive your nukes into the enemy base, park one between the Command Centre and Barracks, one between the command centre and Supply Stash and one in front of the Arms Dealer. Detonate all three and the traitors will surrender.

On Brutal difficulty, the three nukes will not completely destroy the base. In this case, send in a level 3 Rebel Ambush (Generals Power) to mop up the base after the radiation effect of the nukes wears off.

If you prefer more of a challenge and wish to complete the game as outlined above, rather than setting demo traps to destroy the Chinese forces, use Jarmin Kell to snipe the lead vehicle. Mop up the remaining forces as above. When the second wave arrives, you can render any Chinese threat ineffective by blocking the canyon. These vehicles can then be captured later for use in the assault on the traitors (leaving two or three still blocking the entry point of course) or wiped out with your forces later. Use the nuke trucks to prevent the enemy finishing building their Scud Storm. (The computer cheats blatantly here! It begins building a Palace, Black Market, and Scud Storm at the same time!) The GLA will likely wipe out your oil derricks in the NW, within a few minutes of them being captured. However it is worth doing it for the $4,000 you get for capturing them.