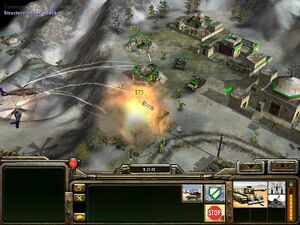 The Allied air assault is unrelenting.

The following strategy will work on all difficulty settings.

This level can be very difficult. Speed of setting up base at the beginning is critical. Here is a step-to-step guide to beat it.

First of all, don't lose hope if you feel overwhelmed. The Allied air and land assault will diminish eventually when they run out of supplies. You just have to wait it out.

From here, you can beat the mission without too much stress, but here are a few pointers.