Narration: When time was too critical to allow for true patterning, an enemy unit could be brought over to the Core side without duplication using a simpler process known as "impression". This was done with the captured Zeus Kbot, and it was discovered that the Zeus possessed valuable information indeed.

Intell-tap Data taken from the captured Zeus indicates that there is a Galactic Gate on an island to the north. Take the Zeus to the Gate, then Capture the Gate.

Without the Zeus, the Gate is useless to us. 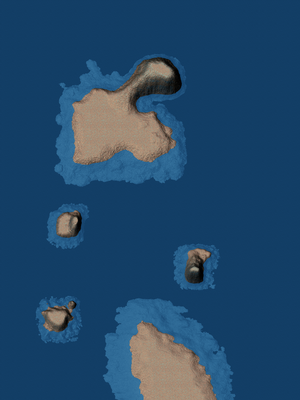 Map for Core Campaign, mission 12: A Traitor Leads the Way

The Galactic Gate is on the northern peninsula of the northern island, where the Arm reside. This mission plays out much like the previous, in that you're low on space and will need to reclaim structures and replace them with higher tech. It's a good idea to start with building what you need to get a half dozen or more Storm KBots out to defend from roaming Crusaders that might decide to harass your base. Build up behind these defenders with Moho Mines and Fusion Plants, then upgrade your KBot Lab. Keep your Zeus under constant repair throughout the mission, as losing it means the end of the mission.

Building the Shipyard may also feel similar to the previous mission, as you may come under attack and have to decide whether or not you can push through or abandon the yard to try again later. Build two groups of Snakes: one group to defend your Shipyard, another to harass enemy ships (which should keep them away from your base, or at the very least start reducing their numbers). Scout out the surrounding areas to locate the Arm units and structures, as well as locations for expansion. A nearby island should be undefended and have a metal deposit that you may find useful, if you can get an Advanced Construction KBot out there to build another Moho Mine (build a transport and defend it on the way out there).

Build up Enforcers and Snakes from your first Shipyard while you start construction of an Advanced Shipyard. Once it comes online, you can start producing advanced warships to prepare to take the battle to Arm's island. Take out the Arm defenses on the remaining smaller islands and engage the enemy naval units sitting nearby.

Once the smaller islands are safe, build an Advanced Radar Tower on the island that gives you the best view of the remaining Arm island. Target everything on the island from long range, remembering that the Gate is on the peninsula, and you need the Gate just as much as you need the Zeus and your own Commander to complete the mission. Once you clear the island of resistance, transport a small supporting group of KBots (if necessary), the Zeus, and the Commander to capture the Gate and finish things.