Narration: During this period of the war, Arm Commanders were frequently accompanied in the field by a KBot model known as the Zeus. The Zeus was heavily armed for defense while the Commander was otherwise occupied, and it was often fed key information and used as a go-between when other lines of communication were down. A Zeus found on its own was usually on such a mission.

Intell-tap There is a Zeus Bot on the island to the south. Be careful that over-zealous Core units do not destroy the Zeus before you can capture it. 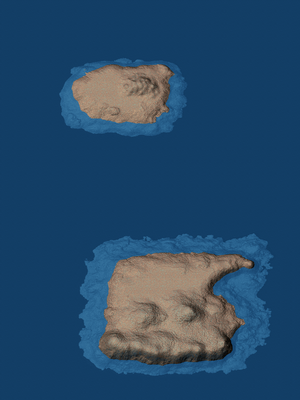 You start this mission on the small island in the north. Build each structure with some thought towards eventually tearing it down to replace it with a higher level structure. Build your resource collectors and KBot Lab and start building Storms and a Construction KBot when you can. Build two Fusion Plants and replace metal extractors with Moho Mines, tearing down Solar Collectors and Extractors as you go.

Try to lure the Arm navy out of hiding and destroy them with your Storms. Sending a unit out into the water may draw them out, but in the worst case you will have to send your Commander out and attempt to build a Shipyard. Be ready to take out the subs and surface ships that will come running, but also be prepared to abandon the building and bring your Commander back if needed. You can always restart the building, but losing the Commander means the mission is over.

Once there's a Shipyard in place, start building Snakes to eliminate the threat from Arm subs. Once the water is fairly safe, build a Construction Ship and start work on an Advanced Shipyard after reclaiming the wreckage. It's time to build Hydras, Executioners, and possibly Warlords to start your assault.

While getting your navy started, you'll also want to get a better picture of your surroundings. Tear down your KBot Lab and replace it with an Advanced KBot Lab. Build an Advanced Construction KBot to put up an Advanced Radar Tower. Once you have a good-sized fleet and the surface targets are visible, start taking them out from a distance. Keep your subs nearby to protect the fleet, in case enemy subs decide to attempt to protect their own.

If necessary, use a small ship like a Searcher to flush out any remaining Lurkers, you don't want them surprising you as you clean up the defenses on Arm's Island, especially since you want to remember to save the Zeus. Use long-distance weapons to take out the remaining Arm units and structures, and then send in the Commander on a transport to capture the Zeus. If you're having problems with smaller units on the island, throw some KBots on the transport to clean them up before the Commander comes along to finish the mission.