Narration: The campaign on Barathrum was nearly at an end. The Arm had been pushed back to a relatively small section of the planet. Eager to take the fight further before the Arm could effectively fortify its defenses, the Core Commander dispatched scouts, certain that they would find a Galactic Gate which would lead deeper into Arm territory.

Intell-tap Barathrum is nearly ours. The next Gate has been found. The Arm Gate is located above the lava flow to the north on Crustal 12. Arm resistance will be strong. 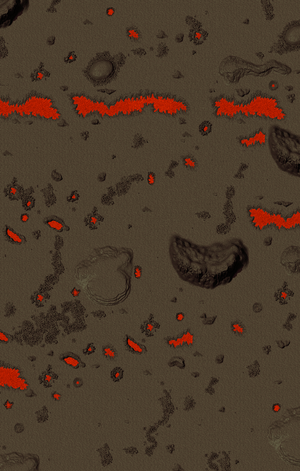 Map for Core Campaign, mission 8: The Gate to Aqueous Minor

You may want to pull back slightly into the corner of the map before beginning the construction of your base. The enemy will be more aggressive than in previous missions. You won't have to worry about aircraft in this mission, so start up production accordingly. Once your defensive units are in place (and holding well if you've started receiving attackers), build your Construction KBot and get to work bringing Geothermal power online.

Start scouting as soon as you can to find more metal deposits. The enemy's attacks will probably become pretty predictable after a while, and you can start reinforcing your defenses in their direction while expanding your base in the other. Remember that you can reclaim metal from the scrap heap left behind by your enemies, too.

Once you're feeling secure, and your metal and energy needs are less pressing, you'll need an Advanced Vehicle Plant, and the associated units. The next step is to build up your strength to push forward and give yourself targeting capabilities for your Diplomats. A mountain to the north (near the center of the map) will provide a good place for a Radar Tower. Most of your force will most likely be made up of Reapers and Instigators, with the usual half dozen Diplomats to give you the long range power once you start acquiring targets.

Once you have them in sight, begin targeting anything that shows up on radar near the lava. Anything the Arm have built along the river is likely to be a defensive structure, and the Gate is further into their base, so you're safe targeting this area without having to see what you're firing at. Of course, as you target further into their base, you're going to want to have your eyes on the targets, as you don't want to damage the Gate.

Once you've got their defenses down, send your larger vehicles (and some supporting KBots) up the middle (where the widest bridge can be found), and a second attack force across the western bridge. Keep using the Diplomats to take down hard targets while your attack forces move in. Make sure to send along some construction units to reclaim any scrap on the bridges and keep them clear for your attack forces. Clear the area of Arm forces and secure passage for your Commander to capture the gate, and if you have some extra forces set them to look for any remaining Arm wanderers and mop up.