Narration: Perhaps the most impenetrable of the Arm strongholds was Montagenet, set deeply amongst the massive mountains of the planet's southern hemisphere. It was the linchpin of Arm resistance. There were only two routes in on the ground, and initial attempts at reaching them had failed. The Core Commander readied an all-out attack.

Intell-tap Arm is well fortified behind the foothills to the north. They are becoming foolishly desperate. Their irrational love of their homeworld may yet work in our favor. If Core can destroy the fortress here, Arm will fail. 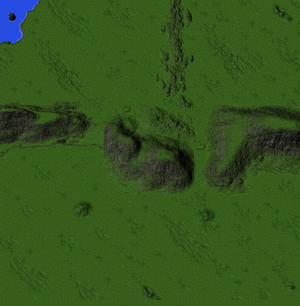 If you want to take on this mission in one sitting, it's time to grab some snacks and drinks and make sure your chair is comfortable. Save often and get settled in, because Arm already owns most of the map when the Core Commander arrives.

Immediately ground the Finks and build resource collectors. Start building a KBot Lab, Vehicle Plant, and Aircraft Plant in the southwest corner of the map. Get radar up as the first units start to flow out of your structures. When your units start coming along, you might want to consider setting the unit orders on anything with long-range weapons to something other than fire at will, since that might bring more Arm units down on your base than you're ready to deal with.

Build Crashers and Slashers for air defense, and a Construction Vehicle (or KBot) to build Pulverizers and Gaat Guns. Build a line of Dragon's Teeth from the left edge of the map north of the metal deposit north of your base. This forces "back door" attacks to move east into the main kill zone northeast of your base, allowing you to concentrate your forces and defenses there; if you only use Dragon's Teeth once in the original campaigns, this is the time to use them.

Build up through the tech tree to get more advanced units and structures. When the Core forces finally include a good number of Diplomats, Reapers, Cans, Pyros, and AKs, along with air support in the form of Rapiers and Vamps, move forward to within sight of the western pass. Keep the Diplomats in the back with an Informer and keep them targeted on the Arm units and defenses.

Don't push forward into the pass or the hills, just sit and deal with the counter-attacks from Arm. Target the defensive structures along the hills when not dealing with enemy attacks (for the most part the Diplomats can handle this on their own, just keep feeding them targets). Keep reinforcements moving into the lines to prevent the Core line from being overrun.

When the Arm defenses are down, and the attacks slow, move forward to take the hills (this could be a couple hours into the mission, the whole process is a very slow advance). Construction Vehicles should search the southern portion of the map for metal deposits, building Moho Mines and Fusion Reactors as they find them. Continue supplying the front lines with new units. Build defensive structures along the hills to replace the Arm structures you destroyed earlier. Hold the hills for a while and pick off any Arm units and structures in range.

In the top-left corner of the map is some water which usually contains an Arm battleship (but not always). That corner is also home to Arm's aircraft factories, and it is well worth sending a few fighters up there to scout them out followed by a bombing raid. Slog through the battle, taking advantage of any chance to rest and build up resources and units before advancing further. Eventually it becomes a matter of whether or not you can bring enough fire power up to advance without over-extending the lines. Eventually one side will fall, and with patience it will be the Core left standing.