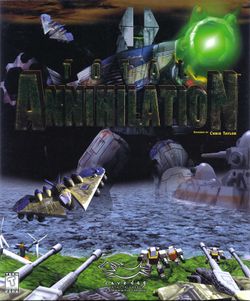 Total Annihilation is a futuristic real time strategy game made by Cavedog Entertainment in 1997. Most people consider Supreme Commander to be this game's spiritual descendant, as both are made by game designer Chris Taylor. Total Annihilation is widely regarded as one of the best RTS games, and some writers complain that no-one has produced a significant advance in many areas it pioneered.

Cavedog produced one "sequel", Total Annihilation: Kingdoms, which had the same design philosophy but a medieval fantasy-based theme.

Cavedog developed two expansions: Total Annihilation: The Core Contingency and Total Annihilation: Battle Tactics. The first was well-received as it expanded both the storyline and the game as a whole through a large number of new maps, missions, and units. The second received mixed reviews for its different focus and seemingly smaller addition to the original game. The poor reviews were further supported by the departure of the game's lead designer (Chris Taylor) before the release of Battle Tactics, and the short time between the release of the two expansions.

The storyline and its accompanying opponent AI is a relatively weak one - two factions, the Core and the Arm, have conflicting views about the same subject - "patterning", which is transferring consciousness from flesh to machines. The Core made "patterning" mandatory for all its citizens - some eventually resisted and formed the Arm. At the start of the storyline, "both sides [are] now crippled beyond repair. The remnants of their armies continue to battle on ravaged planets; their hatred fueled by over four thousand years of total war. This is a fight to the death - for each side, the only acceptable outcome is the complete elimination of the other."

Gameplay differs from that of other RTS games such as Starcraft and Command and Conquer because some units are extremely powerful and have extremely long range - one structure is capable of firing 15 screens away and the nuclear missile has an infinite range.

Additionally, resource management is different from other games in that it relies on supply, demand, and storage. Units cost either metal or energy, and unlike other games in which credits are immediately deducted from the player's reserve, the cost adds a drain on the player's income. It is possible, therefore, to produce units with no loss of resources if the net production of a resource exceeds the net demand.

The game relies heavily on the application of physics, three-dimensional terrain (the camera, unfortunately, is non-adjustable), as well as the power to create new units from scratch. The physics engine is surprisingly advanced - realistic trajectories, inertia, momentum, thrust, and collateral damage. The game's terrain is a two-dimensional rendering with a matrix of height values mapped over it. All objects in the game interact with it as though it were fully three-dimensional: hills obstruct artillery fire, and, if line-of-sight is set to "true", height enhances units' visual and firing ranges. If terrain is steep and jagged, units tilt and turn to meet the face of the ground. Bases can be built on steep terrain to protect them from artillery fire and to create choke points. Artillery shells are affected by gravity, which varies from one planet to another in the Total Annihilation universe. Particularly on lower-gravity moons, some artillery units can strike targets 10 or more screens away.

Total Annihilation has unit AI that was considerably better than in almost all games of its time, and still looks good today. Units have "rules of engagement" that define whether they should go looking for combat or simply defend themselves, and if a group of units has more firepower then is needed to destroy the target specified, they will choose secondary targets for the excess firepower.