Narration: The Core Commander emerged from the Galactic Gate onto Aegus, a small, low-gravity moon orbiting the Arm homeworld. The campaign was nearly at an end. The moon would be taken swiftly, and used as a staging ground for the final assault on Empyrrean itself.

Intell-tap Aegus is Empyrrean's moon. It will serve as a perfect staging area for the final assault on the Arm homeworld. The moon's low gravity, lack of atmosphere and seas makes this a land unit mission. The Arm Galactic Gate is critical to our invasion of Empyrrean. 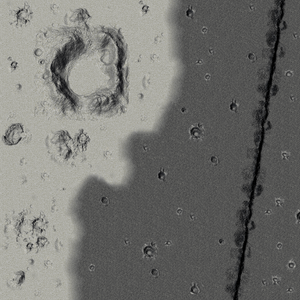 Starting units: The Commander starts with a group of tanks and rocket launchers in the northeast. Another group of Core units, artillery, are in the southeast.

Send the Commander and other troops from the northeast south along the ridge to free the artillery units in the southeast. Arm units and Dragon's Teeth will be found in between, but the group should make short work of them. Head all the way south to find an Arm Moho Mine, and capture it.

Start building a base, working towards an Advanced KBot Lab and Advanced Vehicle Plant. Radar should be a high priority to get an idea of the location of Arm units, and possibly allow the artillery to do some damage early on. Build up an army of Reapers, Diplomats, and Goliaths, along with Cans and Pyros. When the Arm forces coming after the Core base seem to do less damage than the army can easily handle, it's time to start advancing on the crater in the northwest quadrant.

The crater contains the Gate and an Annihilator. Taking out the gun is a priority, but the Gate must be captured, so take care. Take an Informer and some smaller units to defend the Diplomats at the back of the army. Send the tanks and heavier KBots ahead to get the targets in sight and begin the assault. Be ready to target the Annihilator with the Diplomats once one of the KBots or tanks can get inside the crater to spot it and take it out quickly.

Once the Annihilator is gone, the rest should be a simple mop-up to secure the way for the Commander to capture the Gate. Make sure to clear out the enemies on the far side of the crater before sending a group inside, and remember to keep careful control of the units that do go inside the crater to be sure they don't attack the Gate.

From here it's onward to the Arm homeworld.