Narration: The Arm was in trouble - its forces were put at a severe disadvantage by the tremendous reserves of power, the Core had stored on its homeworld. However, probes revealed a massive array of energy storage plants, located not far from the Arm frontlines. A successful strike against them might turn the tide, before it was too late...

Priority Core has a huge energy complex located at Coordinates 6551:447. Much of the power that Core depends upon to defend its homeworld can be found there. We must destroy that energy depot. It is hoped that the destruction of this complex will sufficiently weaken the Core's Central Consciousness that Arm shall prevail.

Info Feed The energy depot consists of numerous energy gathering and storage structures across the sewage canals to the north. Cross over the canals and destroy them all. 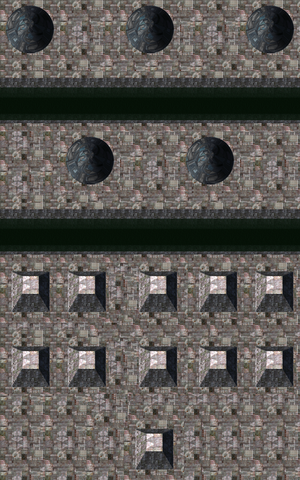 Begin building a base near the starting point, getting production facilities and resource collection online. Once an Aircraft Plant and Vehicle Plant are producing units (start with a construction unit from each, then move on to Freedom Fighters and Samsons to establish base defenses), move the Commander north to one of the forward raised platforms and build a Radar Tower on the platform.

Once a force has been established, begin building a couple of Atlas transports and a Guardian near the Radar Tower. This should be followed by an Advanced Vehicle Plant and Advanced Aircraft Plant. These plants should each produce a Construction unit, followed by Hawks, Phoenix bombers, and Brawlers, along with some jammers and tanks to move into opposing territory with the Atlas transports.

Send Fighters over the first canal and target enemy units and guns with the Guardian. Start building Big Berthas to increase the firepower and soften up the Core before the assault. Build six to ten Tritons and send them across the canal to clear out enemy forces in the water and on the island between the two canals. Keep forces near the close side of the island, though, because Core has gun emplacements across the second canal. Moving the Commander over to the island once the defensive units and structures are cleared will allow capturing a number of Solar Collectors.

Use air superiority to clear away the Pulverizers across the channel and the Enforcer in the channel (there's a Lurker in there as well). Once resistance has been destroyed, use the Atlas to move the Commander over again and finish capturing the enemy structures to complete the mission.

Or just use Brawler spam. Works 90% of the time!