Narration: The Arm had established a major base on Core Prime, causing the Core Commander to speculate that the guard post ambush on Thoroughfare 405 had merely been a diversionary tactic. The Core was now aware that the invaders had arrived through a series of Galactic Gates leading directly to the Core homeworld. The terminal Gate would be invaluable if it could be captured intact. It would allow the Core to begin a retaliatory attack which could change the course of the entire war.

Intell-tap Arm has established itself at an intolerable level on our homeworld. There is a large infestation of them centered on Prime Block 520:522. This may be the location of the Gate by which they arrived on our world. 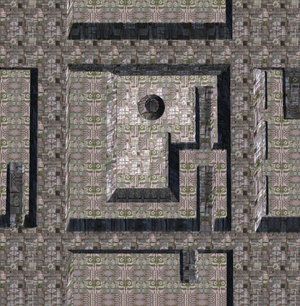 In the southwest corner, where you'll start, build your resource collectors, KBot Lab, and Vehicle Plant. Place a Radar Tower near the center of the starting area. Begin building Storms, Thuds, and AKs as soon as the KBot Lab is ready, and a Construction Vehicle and Instigators as soon as the Vehicle Plant is ready.

A patrol of Rockos and Flash tanks will approach from the north, but as long as you don't engage them they'll continue off to the east. They'll return later, but you'll have a stronger force to deal with them at that point. A few Flash tanks may also come wandering into your base, but hopefully you'll have some units produced and waiting for them.

Build an Advanced Vehicle Plant as soon as your Construction Vehicle is ready. The Plant should build Diplomats (to target enemy turrets), an Informer (to detect enemy units), and several Reapers (to defend the whole group).

Start moving your units east. There will be a ramp that takes you into the center platform, towards the Gate. You may encounter a few units along the way to the units defending the Gate itself, but you should be able to handle them by targeting with the Informer and attacking with the Diplomats, Reapers, and any long-range KBots you may have brought along. There will be two LLTs and a Defender south of the Gate. Everything else should be level 1 KBots and vehicles that won't do much damage to your artillery vehicles and Reapers. Just make sure not to damage the Gate, and bring up your Commander behind your main forces to capture the Gate when the defenses are cleared out.

Alternatively, w/o unit mod, you will only have access to level 1 KBot Lab and Vehicle Plant. Well, you do be able to build the Advanced KBot Lab, the problem is, you can only build the useless Pyro in this mission. So, you have to rely on the level 1 ground units to win this mission.

Use Slasher for initial defense against the first few patrol groups except the very first rocko patrol which you probably have to deal with the inital units. Pay attention when rockos retreating east into the LLT's fire range. Once Slashers are in groups, you can stop building them and start building raiders for base busting session. Also set up the KBot lab and producing Thud/Storm groups in company with raiders.

You can move your commander up to the east high rise to set up secondary KBot Lab and Vehicle Plant for faster units productions. And have Construction vehicle build MT alone the northern edge to knock out the LLT defense line with radar targeting. There are also two LLTs on the rise guarding the exit ramp. You can either D-gun them or radar targeting them using Slasher or MTs.

Now your initial base should have plenty (25-30) of Raider/Thud/Storm. The trick here is to have them going NORTH rather than going up the heavily guarded ramp to the central high rise. There is a backdoor ramp on the northwest edge of the central high rise that is climbable for most units and only guarded by a lone LLT. So, have your base busting group going up to thee up-left corner of the map and clean up the stationary units there and then moving up to the high rise. If you haven't used radar targeting from the western high rise to knock out the lone LLT, it doesn't matter. It can't kill all your group, once you starts to climb up, it goes down easily. Now you can have the factories set the new rally point to the rise and have your base busting grouping sweep the central high rise. The few LLTs simply can't hold the lines. Just don't open the +shootall switch here since you have to keep the stargate alive.

In the mean time, the seconde attack group from the secondary factories should go to the lower right corner and clean up the patrols there. once the central high rise is cleaned. have all the units going for the right high rise for final clean up and send your commander to capture the stargate. Keep building radars to have good coverage of the map and also good for hunt down the last arm unit/structures.