Confronting the Core was difficult on Tergiverse IV, where its forces were already well entrenched. Arm battalions were hard-pressed to reach and destroy emplacements and protected locations, such as the Bromid Maze, a complex natural canyon formation. The tactical advantages to the Core were such, that even the Arm speedy KBot's scouting teams were often cut off and surrounded...

Destroy all Core units and structures.

Priority Core emplacements entrenched within the windblown formation known as the Bromid Maze must be destroyed in order to secure Tergiverse IV.

Info Feed A Zipper scouting team has been isolated to the West. Rescue the team if you can. Their weapons and swiftness will be helpful on this Mission. If you are able to capture and interrogate a Core unit, their knowledge will become your knowledge - especially helpful in the Maze. 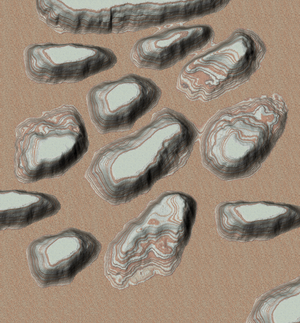 Starting units: Commander, Zeus, Hammer, 2 Spiders west of center on the southern edge of the map. 4 Zippers in the northwestern corner of the map.

The southeastern corner of the map is protected by two mesas. Build a base here, starting with a couple of metal extractors and an Aircraft Plant along the southern side of the mesa that runs north-south near the center of the southern half of the map. Build a Radar Tower about half way up the mesa, as well. The Aircraft Plant should begin working on fighters and a Construction Aircraft, while the Commander begins building KBot and Vehicle Plants.

Core land units may begin infiltrating your base in small numbers before you have significant forces to counter them. One way to take care of them early on is to capture them with the Commander. Spiders can paralyze the enemy units while the Commander works to capture them. Since this won't work as a long-term base defense strategy, though, the KBot and Vehicle Labs need to get to work producing ground troops and preparing for an assault.

Once defensive units are in place (don't forget to make sure the fighters are patrolling above the base, and occasionally sending a fighter or two north to scout can help), build a Guardian on one of the mesas. Use radar and fighters to select targets. Destroy as many defenses as possible (especially structures like the Punisher) before sending in two or three assault groups to attack the Core base simultaneously. Send in the small units first, followed by larger units, and fire over their heads with artillery and the Guardian. There's not a lot of room to move, and being able to concentrate fire by taking advantage of using smaller KBots in the front of the assaulting force will certainly help (though the Core will still have the advantage at the point where the corridors open up into their base).

Take your time destroying the Core base and units. There's no need to waste resources if you can pick them off at a distance.