Narration: Defenses on Core Prime were severely damaged by the successful raids on Core energy storage facilities. Core forces fought with increasing vigor and desperation, as the Arm prepared to cross the sea, known as Aqueous Body 397. Across it, on the planet's largest continent, were Central Consciousness - the massive computer mind-cluster, which controlled the Core...

Push across the polluted waters to the Core port beyond. Destroy the port facilities and all Core units...

Priority Across Aqueous Body 397 is Port Complex .016. Build sufficient units to cross the oily waters and destroy any fortifications that you find at the Port. Our final push to Central Consciousness will then begin.

Info Feed The entrance to Port .016 is sure to be guarded - and we have lost the element of surprise. Core is certain to be ready for your assault. Losses will be heavy.

The thoughts of all Empyrrean are with you Commander. 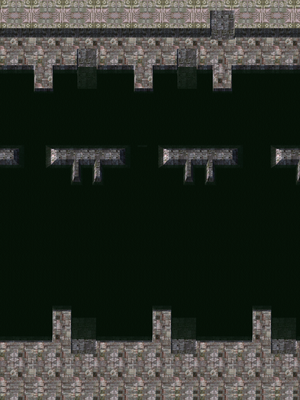 Build resource generators, followed by the three Construction Plants (naval, air, and vehicle). While the naval forces will be the bulk of the assault force on this map, the air support and radar jamming units (and amphibious vehicles) will be important as well. Build a handful of Construction units at each Plant before beginning production on the defensive units. Begin production of Level 2 Plants as the initial forces begin rolling off the production lines. Lurkers and Crusaders should stay on a defensive patrol and new units should take a defensive posture.

As the Core assaults begin, the Commander and a Construction Ship should be reclaiming metal between attack waves. Unit production should continue and the other Construction units should work on upgrading the technology levels and getting new units into production. The next priority should be a Big Bertha placed on the peninsula (to get as close to the enemy land mass as possible) along with a Jammer and some defensive units (Lugers, Defenders, and Skeeters). The Bertha should be able to target Core Gaat Guns across the map.

A Millennium battleship, Conquerors, and Colossus carriers will be the cornerstone of the naval assault. Build a Moho Mine and Fusion Reactor to support the needed resources for the construction and production. Use an Atlas to transport a Jammer to the Colossus in order to hide the naval fleets from enemy radar and still have the ability to repair aircraft on the front lines.

The Bertha should be targeting enemy guns as the navy moves into position with regular air support. A dozen or so Tritons should be ready (in 2 or 4 groups) to cross the water and make landfall as the navy pulls into position (after clearing the islands). Subs and smaller ships should surround the larger battleship, carriers, and Conquerors, providing adequate defenses for them and clearing the way so their power can be brought to bear against the Core forces along the northern edge of the map. With a combined air, sea, and amphibious assault, as well as the continued blasts from the Big Bertha, it should only be a matter of time to make the slow assault and destroy every last Core unit and finish the mission.