The Arm commander had reached Barathrum - a turbulent, young world, whose surface was just beginning to cool. Barathrum was a key, strategic point, fabulously rich in mineral resources. It supplied a large percentage of the metal, used by the Core throughout the galaxy. Control of Barathrum was critical - the fight would be intense...

Destroy or capture all Core units and structures. Capture the Moho Mine.

Priority 1 Barathrum! The molten metal-dense world where Core has established vast metal extraction farms and industrial complexes. Go for their heart Commander. Take out their extraction farm, but capture the Moho Mine. You will hurt Core severely by depriving them of the resources of Barathrum's mineral rich mantle!

Info Feed The Gate will be guarded. Be ready. Secure an area and build a base ASAP. Be ready for air and ground attacks.

Warning! Core will resist as never before. Barathrum is absolutely critical to their war effort. 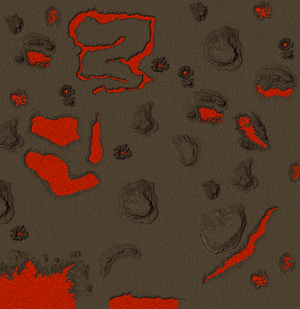 The Arm Commander starts on a twisting lava-lined path in the northwest. Along the path is a metal deposit and a Light Laser Tower. The Commander will take a lot of damage in an attempt to capture the tower, so it's usually best to destroy it.

Find a couple more metal deposits in the northwest, then build a KBot Lab, Aircraft Plant, and a Radar Tower. Start building Jethros, Hammers, Peewees, and a Construction KBot. Once the Aircraft Plant is ready, build a Peeper or two to reveal the map, a Construction Aircraft, and some Freedom Fighters and Thunder Bombers. Use KBots and aircraft to establish a defensive perimeter around the base while building some Defender missile towers.

Eventually an Advanced KBot Lab and Advanced Aircraft Plant should be built. Once these buildings are ready, start building an Eraser, along with some Fidos, Zippers, and a few Zeus. A half-dozen Brawlers and some Sentinel lasers should be helpful as well.

Once the Core attacks begin to slow down, take a group of well-supported short-range KBots to attack specific targets as the Commander heads east to take the Moho Mine.