Narration: The Arm Kbot lab had been neutralized, but the threat to Core Prime was far from over. An Arm company captured a guard post on a major thoroughfare and began destroying Core transports as they arrived. Valuable cargo was lost, including important experimental personality hybrids. Central Consciousness increased the processing partition for planetary security, and added forty thousand new minds to the cluster.

Intell-tap Arm infestation is worse than anticipated. They have ambushed the guard posts on Thoroughfare 405 and are destroying passing transports. Put a stop to this foolishness. A convenient base will be necessary. Rescue as many transports as possible. 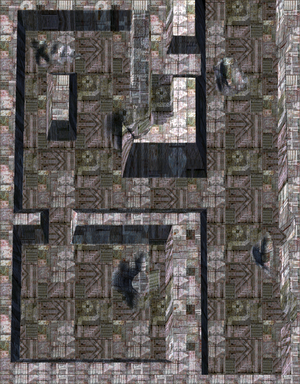 Starting units: Commander, 2 Storms; there are additional Core units on Thoroughfare 405, but you have no control of these (though losing them will negatively impact your score for the mission).

There are enemy units along the eastern ridge and a number of roaming KBots (sometimes small groups of KBots). Keep the eastern ridge in mind when building your base, as they will try to destroy any building they can target. Build up along the western edge of the screen and defend your base with KBots (AKs and Storms) as you build a Vehicle Plant.

Once the Vehicle Plant is active, start producing Instigator tanks to bust through the Hammers trying to prevent you from leaving your base. Once you've cleared the Hammers, shore up the vehicles with KBots to defend against the counterattacks that are sure to follow.

Make sure you have plenty of Storms and Thuds to clear the ledges (use AKs to spot the enemies sitting up there), and proceed to take them out. Firing from below, at range, may be your best bet for clearing all of these enemies with minimal casualties.

Once you've cleared the ledges, create a small group of units to clean up, and set the rest of your vehicles and KBots to roam. Take your small group and go to either end of the Thoroughfare to flush out units hiding along the edges of the map while your roamers drive out the rest of them. Once the map is clear of the Arm presence, the mission will end.