Narration: The Core Commander felt that the Arm could be effectively challenged on the open seas of Aqueous Minor. Gaining access to those seas would be a key strategic move. The Arm had apparently reached the same conclusions, as all routes to open waters were heavily defended.

Build a transport ship and sail it safely through the Gauntlet. 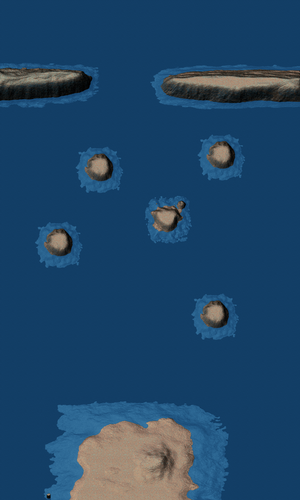 There won't be enough time to get a Shipyard up and running before the Arm navy locates and destroys it, so you'll have to start with the usual setup: metal and energy production, and a KBot Lab. Build a strong group of Crashers and Storms to fend off the Arm navy. Once you find your KBots can hold the island against the Crusaders, get started on the Shipyard.

Snakes, Enforcers, and a Construction Ship (reclaim the wrecks and repair your navy) will be your next priority, and should start helping with defense as soon as possible. Start with the Snakes, as the Arm Piranhas won't leave the Enforcers alone if you try to build the surface ships too early. You'll need to secure enough time for an Advanced Shipyard and the accompanying units, Hydra and Executioners should get things started, and if you can produce enough metal you can add a couple of Warlords to the mix. A strong naval force is going to be necessary to get through this mission.

Use your Snakes to get an idea of what the defenses are like on each island, and to locate Arm ships and torpedo launchers. You don't want to hit any resistance with anything less than your full force, especially since the islands are extremely well defended, and you could lose a lot of ships trying to attack with too small a group. Keep your ships defended with your Snakes, because attacking anything could draw their attention.

Build an Advanced KBot Lab and clear the island in the center of the map. Send a Level 2 Construction KBot to the island and build an Advanced Radar Tower to reveal everything except a handful of submarines. Use the radar map to target the remaining defenses. At this point you'll want to work towards clearing the way to start the Gauntlet, and make sure you flush out the remaining subs before doing so.

The Arm ships north of the Gauntlet have better range than the Core ships you've built so far, but they won't be able to target your units as long as you've cleared the defenses. Lay out your submarines just south of the gauntlet in case they decide to come out, and start hitting them with the long-range weapons on your surface ships while staying safely out of sight of the Arm Conqueror and Rangers.

Once you've cleaned up the map and removed all possible threats, sail an Envoy through the gauntlet to finish the mission.