Narration:Following through the Core gate, the Arm commander made a bold counterattack on the Core outpost, from which the invasion of Empyrrean had been launched. Thalassean, a windy planet, largely covered by water, had been captured by the Core quite recently. Core forces there were unprepared for the sudden appearance of the Arm commander in the midst...

Secure a beachhead on Thalassean. Set up a base, build a shipyard, and destroy all Core units in the area.

Priority Critical Thalassean stands between Core and Empyrrean. It is critical that you secure Thalassean for Arm.

Though you may have the element of surprise when you step through the Gate, Core will rally quickly. Prepare your defenses as quickly as possible. 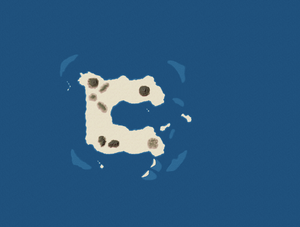 The Commander will be welcomed by a group of AKs. Shoot them quickly (but don't use the D-gun as much or you'll end up with low energy), reclaim the metal they leave behind, and start building up metal extractors and wind generators. Watch for Searchers approaching the harbor and take them out as well (this time it's easier to use the D-gun). Once resources are secured, build a Shipyard in the harbor.

Build two Lurkers, a Construction Ship, and start producing Crusaders and more subs. Put the two Lurkers at the entrance to the harbor, along with Torpedo Launchers. While building the Launchers, remember to reclaim the Searchers the Commander destroyed earlier. You can also build sonars, but unless one is built in the bay they won't stand functional for long, so it's better to focus your attention to defense.

The Commander should flush out remaining AKs on the island and capture or destroy them. Once the island is relatively secure, build a KBot Lab on the western side of the island (the area just south of the inlet seems to be a good location). Start building Hammers to defend against Core surface ships, and a Construction KBot to build Guardians along the coast. Where you build them along the coast is up to you, but I've noticed that at least two close to each other for every location (south, west, north and east in that order) works best. Just remember to leave at least one Construction KBot per location behind for repairs.

As more ships begin filling the harbor, start sending out patrol groups of 2 or 3 surface ships with an equal number of subs to patrol the northern and western coasts of the island. Build an Advanced Shipyard to start producing Piranha and Conquerors. Once you have a patrol group made up of advanced ships, send them out along with a lower level patrol group to flush out the remaining Core navy and destroy them all (but keep building more ships in case you sustain losses to the patrol groups). Once all of the Core units are destroyed, the mission should end. There seems to be a bug that when your Shipyard(s) are destroyed and you should've won, you'll hear the ending sound, but you get no ending. In that case, just rebuild the Shipyard and you'll finish anyway.