Intell-tap We have isolated a major Arm infestation on Crustal 2. Arm has conveniently constructed a metal farm there. Capturing the Moho Mines there will save us the trouble of building them ourselves. Control your units carefully or one may destroy a Moho before you can capture it.

Capture a Moho Mine and destroy the Arm vermin. 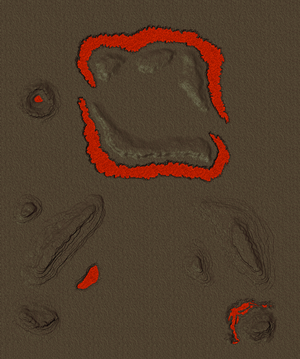 You will have plenty of resources, a decent place to start building, and plenty of time to do so. Take advantage of this to build up quickly and start devising a plan to raid the enemy base. This mission is fairly forgiving, so you should take advantage of this fact to work on coordinating your attacks and making sure you pay attention to your targets.

The enemy base will be almost completely surrounded by lava, with tight chokepoints at the two entrances. You can see this on the map, with the ring of lava surrounding a large portion of the northern half of the map.

You should be able to take advantage of four geothermal vents and five metal deposits within reach of your starting area. By now you should be familiar with the starting routine when there are no more immediate concerns: build metal extractors, energy generators, and a KBot Lab. Start building Crashers, and a Construction KBot. The KBot can build your Geothermal Power Generators, and these will probably meet your energy needs for the remainder of the mission (and your commander can continue building metal extractors to take care of your requirements in that area).

Once you have an ample supply of energy and metal, and a good foundation of KBots to defend your base (in the rare case the enemy starts looking for you), you can start preparing to build your attacking forces. This means working up the technology tree and getting an Advanced Vehicle Plant started on Reapers and Diplomats. Some more KBots to help with any defensive needs and fill in gaps in the offense may be useful, as well.

Once you have enough vehicles and KBots to split into two strong forces to attack the enemy base (and leave some behind for defense or reinforcements). Hold six or more Diplomats back at the base, send the other two groups (roughly equal in composition) due east and west, rather than north. When they reach the edges of the map, they should head north to locate the bridges that will permit them access to the Arm base. The Diplomats should approach from the south and acquire targets as the remaining forces move in to make those targets visible.

It is highly recommended that you use a group for the Diplomats and only target based on the targets on the screen made visible by your other units. You'll want to target defensive structures (ie Defender towers) first to save your strike force from taking heavy losses. Make sure to keep your units targeted or pull them out of range in order to save the Moho Mines.

Once the defensive structures and enemy units are destroyed, move your Commander in and capture the Moho Mines. Once you've captured one, you can clean up the mess.

Go to top
← The Cleansing Begins... | Pulling the Noose Tight | The Gate to Aqueous Minor →