Narration: When it appeared that its control of Barathrum might be compromised, the Core began concentrating its efforts at Crustal 7 - a readily defensible strong point above the sheer cliffs, known as Landown's Interface. It amassed a sizeable arsenal and initiaded the construction of a major firebase to dominate the area.

Destroy the Core base located above Landown's Interface.

Priority Core has established an immense stockpile of war supplies, and is attempting to build a major fire base on the other side of the barrier known as "Landown's Interface". The Interface's sheer wall runs for many klicks where Crustal 8 has pushed atop Crustal 7.

Info Feed You will have to find a way over Landown's Interface in order to stop Core. Take to the air Commander. 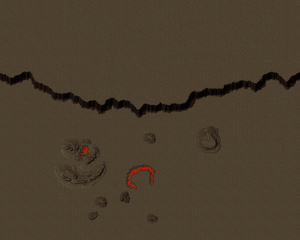 Build a base with an Aircraft Plant and anti-air defenses. Once a Construction Aircraft is available, send it east to build Geothermal Power Plants. Send some Jethros and Samsons to defend the Plants from Core attacks.

Build Freedom Fighters, Thunder bombers, and a few Atlas transports to attack Core's base north of the wall. Build an Advanced Aircraft Plant to produce Hawks, Brawlers, and Phoenix bombers.

Destroy the gun emplacement on the western edge of the wall to allow the transports better access to build a second base to produce ground units to assault the Core base. Hit the base itself with aircraft to keep their numbers down as the new base prepares to join the battle. The KBot Lab and Vehicle Plant in the new base should focus first on building anti-air defenses, then building assault forces once the base is secure.