Narration: Having occupied the planet only recently, the Arm forces on Rougpelt were not particularly well-entrenched. The Core Commander was often able to corner, isolate and destroy individual Arm garrisons while sustaining relatively few losses.

Intell-tap A small Arm garrison has been isolated. This should be a mop-up exercise. The garrison is

small and poorly defended. Capture as many structures as possible and set up a base.

Capture the structures and destroy the Arm units. 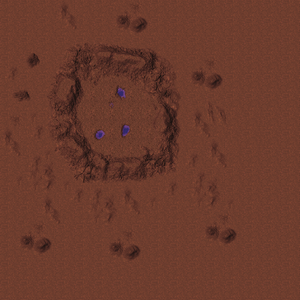 As if in compensation for the sparse resources of the previous mission, this mission starts out with a veritable army under the Commander's control. On the other hand, the mission has a lot in common with the previous one, in that there won't be a lot of building going on, just capturing and defending what you can, and destroying the Arm forces that stand in the way.

Immediately head east to attack the Arm base. Take out the four Sentinels one at a time, and the six Zippers as they come out to attack. Capture the remaining buildings, and send the Commander back towards the starting point to build some Metal Extractors. Reclaim the metal from the Arm base's Metal Makers, and build a selection of heavy KBots, a Vehicle Plant, and some Instigators. Build a Construction KBot, Guardian Towers, and a Radar Tower to help defend against the coming counter-attack.

Once the attack comes, it's all up to how well you can mobilize your forces to keep the enemy from destroying anything of value in your defense. Use the Guardians to attack the long-range Arm units; the Merls are very similar to the Core Diplomats, and the damage they can do if left unchecked should be obvious. Once all of the attacking units have been defeated, the mission will be over.