Total Annihilation/Core KBot Base, Destroy It!

Narration: Although they've managed to free the captured gate and return the commander to Empyrrean, Arm troops continue to (...) attacks by Core forces in increasing numbers. It became apparent that the Core had managed to construct a KBot Lab somewhere on Empyrrean itself and was building an army as fast as it could.

Objective: Build a base and destroy the Core KBot Lab.

Special Priority Core has established a KBot Lab on Empyrrean! Remove its loathsome presence before Core strengthens its foothold on our homeworld!

Info Feed The KBot Lab is located across the river to the south. Expect Core patrols. 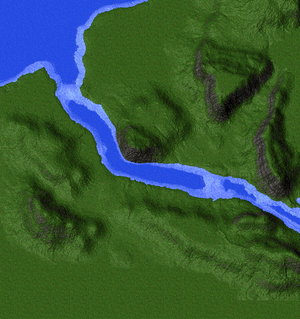 Map for Arm Campaign, mission 2: Core KBot Base, Destroy It!

You're going to start near the center of the top of the map. You want to start building right away by getting the metal extractors and solar collectors up right away. (Hold the Shift key down while issuing orders with the Commander to queue up build commands.)

Enemies will start to approach fairly quickly from the river and a ridge to the east of your starting point. Split your units in half (1 PeeWee & 1 Rocko per group) and send a group in each direction to defend your base. Send the Hammer along with the group heading for the ridge, not only to help the defense, but to take the ridge as a good position from which to use artillery.

Once your metal extractors and solar collectors (about 3 of each) are up, start building your KBot Lab. You should queue up more units as soon as the Lab is finished, but you won't need to worry about building anti-air units for this mission. Just crank out more of the units you already have (PeeWee, Rocko, and Hammer).

Build a perimiter of LLTs once the KBot Lab is up, focusing on covering the two river crossings. The hill just south of your base may be a good place to build the lasers, offering more coverage (or plant some Hammers up there and place the LLTs at the base of the hill to either side). Patrolling units may wander into your perimiter from time to time, and while the LLTs will help, you may want to have a group of units ready to respond and remove the potential threat.

When you feel you've built enough KBots (or maybe pulled enough Core forces into your perimiter and taken them out), prepare to cross the river. The crossing just west of your base is the least defended, giving you the easiest crossing and entry into the Core base. If you've built a larger force, you may like the full-frontal attack at the southerly crossing, or split into two groups (maybe baiting the units protecting the southerly route to draw units away before attacking via the easier route).

The Core KBot Lab is located in the southwestern corner of the map. You will want to move slowly and concentrate your fire on defenders as you go. You can follow the river to take out defenders first (preventing them from coming up on your flank as you make your way to the Lab), or try to head straight through and take out the defenders as you go. Your base should keep up production, in case you need reinforcements or will need to start the invasion again.

Go to top
← A Hero Returns | Core KBot Base, Destroy It! | Spider Technology →