Narration: Using the Arm's own Gate against them, the Core Commander carried the conflict back to the Arm outpost at Barathrum. Barathrum was a young, molten planet, and had been a key strategic victory for the Arm due to its enormous wealth of mineral resources. Retaking it would be a heavy blow.

Intell-tap Barathrum is a hostile world. Its metals are necessary for Core success. Establishment of a base essential. Placement of Metal Extractors on metal deposits will increase metal extraction rate. 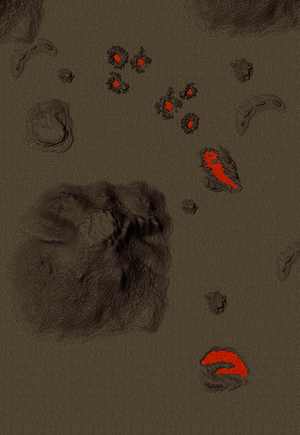 NOTE: Place a metal extractor anywhere will give you +0.5 metal/s. It's no longer like Core Prime. But it's still 10 times energe efficient than a metal maker. It's harder to get +40 metal/s like on Core Prime in 15 minutes, but +20 metal/s is still doable if you carefully balance your energy and metal.

You'll start the mission with a lone Commander perched on the hill next to the Gate, just south and west of the center of the map. Run due south with your Commander to get into a better position for starting your base. You'll want to setup in the southwestern corner of the map. You'll find rocks you can reclaim and a metal deposit that'll help you get a good start.

Build your KBot Lab first, in order to get started on a defensive force. Follow this with a Metal Extractor on the deposit and a Solar Collector. Then move your Commander east along the southern edge of the map to find another metal deposit and more rocks you can reclaim. You'll need to keep on top of your metal collection throughout this mission, as the resource is a bit scarce.

Build a series of Crashers, Storms, and Thuds at your base. Build a Construction KBot as soon as you have enough defenders. If things get a little hairy, build some LLTs and Punishers to help out. Keep a strong group of Crashers in the western portion of your base to defend against airstrikes, and reclaim the wreckage as soon as possible to maintain your metal reserves. Build Vehicle and Aircraft Plants as soon as you can afford the metal. Slashers and Avengers will help with the defenses, and you can build a few Infiltrators to take care of long-range Arm KBots that might start harassing your defenders.

Once your air force is solidified, you can patrol the front lines and contain most of the enemy attacks. At this point, you should build up a solid attack force of KBots and vehicles to move on the Arm base. If you'd like, build a Level 2 KBot Lab and Vehicle Plant, turn out some Diplomats and Level 2 KBots to support them, and then fill out the ranks with some of the units you built to drive back the Arm attacking your base.

Wait for the next Arm attack force, take them out, and then bring your forces forward to push the counterattack back to their base. Their base is spread out in the northeastern corner of the map, defended by LLTs and Sentinels. If you're nervous about carrying through into the base, hold back and build Radar Towers to give your Diplomats good targets, and take the defenses out at range.

Everything from here on out is cleanup, just watch out for friendly fire if you push into the base while the Diplomats are assaulting the base.

Alternatively, a quick build-up with level 1 units can easily take down the enemy base on Hard level. First defeat the 3 peewees guarding the gate. A nicely aimed D-gun can kill the two left peewees in one short. Before you retreating downhill, take your time build 3 solar and a radar. The radar is important as it will provide you advance alert for imcoming enemy patrols. And don't worry, the enemy air units won't be activated until very late.

Now run down south and quickly set up a Vehicle Plant, and start building a Contruction Vehicle and 5 Slashers. Reclaim all the metals available are vital as it helps you build more resource collecting building quickly, which in turn keeps your VP in full production. Build another radar to cover the eastern corner when you have spare resource to reveal a group of red dots there.

Don't worry if they started moving, the incoming patrol always takes the eastern hillside down to your base. So set up your main defense there. When you see some red dots coming down quickly, those are some zippers. They are best defended by missle units. And if you are quick enough, you should have your Construction Vehicle set up at least one MT and have 2-4 Slashers ready. Move your Commander to intercept the patrol and draw fires while let the missle units kill the zippers. Reclaim zippers will give you enough metal to build a KBot lab, and start mess Thud/Storm/Crasher groups for base busting.

Keep the Commander close to front as another group of Peewees are coming soon. Once they become your metal, you should have enough Slashers to push your front north. If you have 10 Slashers, you should build another Construction Vehicle to help building more solar and mess Metal Extractors, just put them anywhere to get the +0.5 metal/s, they will gradually add up your metal incomes. The Commander should hang behind the moving front lines, add raders to provide more coverage, and add metal extractors as the new metal rich deposits reveals and solars as you see fit.

You'll meet some more incoming patrols as you move north. But if you have more than 10 Slashers on the front with ever more KBot joining in, you don't even need to worry about it. Simply focus on keep building new units and keep up your economy. Once you reach +20 metal/s you can have one of your Construction Vehicle to guard the KBot lab to hurry the production there.

Once your front reaches north edge of the hill, and you have a least a group of 15 base busting KBots. It's time for the final sweep. Move all the Slashers to the west to first kill the Scout plane that have been annoying you since the game starts, and then move them to the enemy base revealed on the front line radars. But keep the distance, they are more purpose is to fight against the moving patrols around the base. You main attack group should to east of the lava lake and attack from that side together with Commander. If you build up your force fast enough, the enemy base should be very lightly defended by a few LLTs and some stationary units and yes, some landed fighters. D-gun if you think fit. But most likely, your swarm of units are more than enough to take down the base in one sweep. Build radar in case the game doesn't end and hunt down the hiding units.