Narration: The increased determination and apparent desperation, displayed by the Core in its defensive Rougpelt, did not go unnoticed by the Arm commander. Rougpelt was not an especially resource-rich planet, which led the commander to suspect, that the effort had more to do with what lay past the next gate - CORE PRIME could not be far beyond...

Destroy all mobile units and capture the Gate intact.

Priority Core has been pushed back onto the ancient earthworks known as the Motien Ramp. They have assembled a Gate there... perhaps the final Gate. Surely Core Prime, the Core homeworld must be near. Destroy all mobile units at the Motien Ramp, and capture the Gate there. 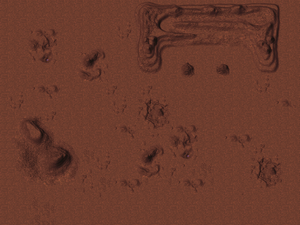 Core's base can be found in the northeast with a strong force of Reapers and Raiders, and an Intimidator cannon that can start shelling the Arm base as soon as Core's forces can locate it. They also have a small air force (Rapiers and Vamps) and a handful of KBots.

Seek shelter from the Intimidator among the mesas northwest of the starting position. Arrange Samsons and Merls along the south end of the mesas to protect them. There are metal deposits north and south of the base, and building Solar Collectors and Metal Extractors should be the next priority. Build an Aircraft Plant as close as possible to the mesa to protect it, followed by a KBot Lab. A Construction Aircraft to scout metal deposits should be the next priority, followed by Freedom Fighters to hold a defensive patrol over the base, but keep all of the aircraft away from the enemy base.

The Construction KBot should make its way to the top of the highest mesa in the area and build a Radar Tower to get a better look at incoming enemies and begin planning a counter. A Defender and Sentinel should be next to defend it.

The Core Rapiers will make several passes, followed by a group of units including AKs, Weasels, and a Diplomat. The Sentinel, Fidos, and Zippers should have no problems with them, but the Diplomat could hang back and cause trouble if no one moves up to take care of it.

Build a Vehicle Plant to start producing Flash and Stumpy tanks, and a Construction Vehicle to build an Advanced Vehicle Plant. Build an Advanced KBot Lab and Advanced Aircraft Plant to start producing the Level 2 KBots and Aircraft that will be needed for the assault. Until there's a strong attack force ready, don't move towards the enemy base at all, as the Intimidator will start firing once they approach. A strong force of Brawlers, Merls, and Stumpys (or Bulldogs), along with a half dozen Zippers, Fidos, and Rockos, and an Eraser or Jammer to lead (and another to follow) the forces, along with two Seers to sight targets and a Construction unit for repairs will make up the attack force needed to get things moving. Waiting too long will allow Core more time to increase their own forces, and increase the chances the Intimidator will start firing.

Send Hawks and Phoenix bombers to attack the Intdimidator in the center of the base when the assault force starts to move. There are Gaat Guns, Diplomats, and Punishers guarding the Intimidator, so it's important to send in enough aircraft to still take out the Intimidator after taking some losses. As the ground forces approach, the Merls should target the lead Gaat Gun. Keep the attacking forces grouped tightly, targeting carefully to avoid destroying the Galactic Gate. Use the air forces for surgical strikes, and make sure to take out any remaining Core Brawlers before bringing in the Commander to capture the Gate and finish the mission.