Narration: The campaign on Nigh Pilago was lengthy and ferocious. Casualties mounted on both sides. The Core Commander could feel the closeness of the Arm homeworld in the desperate fury of the Arm troops.

Intell-tap Sensors indicate that there is an Arm Gate on the rocky outcropping to the north. It is consensus that the gate will lead to the Empyrrean system. Capture the Gate. 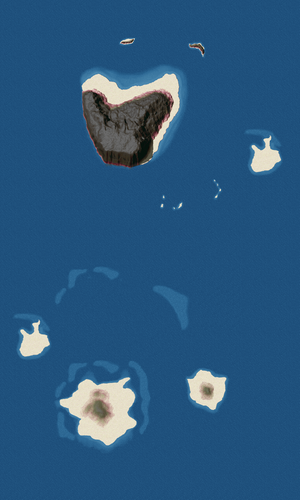 Map for Core Campaign, mission 20: The Gate to Aegus

This mission opens up a little more space for the Core base. Start building quickly to get some Storm KBots for defense, followed by Punishers and Pulverizers to make things a little more permanent. The northern coast of the island will be the target of an amphibious invasion, so this would be a good place for the defensive structures.

Next, get an Advanced Radar Tower up to get a better idea of Arm's movements, and to prepare an offensive. Get a Shipyard up on the southern side of the island and start building Snakes to get rid of the Arm subs that are attracted to the scent of Core in the water. If the ships and subs stay south of the Shipyard, there's a good chance Arm's ships will ignore them in favor of attacking the yard.

Once the Advanced Radar Tower and Shipyard are up and running, upgrade the resource collectors to support upgrades and fleet buildup. Once the Moho Mines and Fusion Plants are online, build a Construction Ship and get an Advanced Shipyard to start producing a more advanced navy. Use the combination of Hydras and Executioners along with the Advanced Radar Tower to target Arm defenses. You should find a Defender and a Moho Mine on the smaller island to the east, and a few Torpedo Launchers south of Arm's big island.

Once these structures are taken care of, start attacking units and structures on the big island itself. Leave the northern outcropping alone until you've cleared the Arm from the south, and don't attack it with radar alone (since the Gate is up there). There are a handful of units with decent range on the island that may give the Core navy some trouble, but for the most part the island can be cleared from a distance.

Once the forces are reduced, move in closer and clean up the remnants. Take the Commander out to the island and capture the Gate to finish the mission.