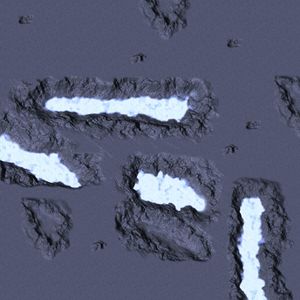 Core is well entrenched on this rock world... and they appear to be employing stall tactics.

With two of the four worlds under Arm control, it is critical that we move quickly to secure Temblor as well.

Priority Critical:
Temblor is metal rich, though deposits tend to be hard to access and the richest veins are concentrated in deep fissures.

Removing Core from Temblor gives Arm an important source for that valuable resource... while denying it to Core.

Info Feed:
Temblor's crust is unstable, and prone to earthquakes. It would be wise to have a construction unit on patrol throughout your base at all times in order to make the repairs needed after an earthquake.

The few surviving scouts report cloaked land mine fields. You will have to clean up the mines as you progress.

Core emplacements will be heavily fortified and its approaches mined.

New units are available that will help you overcome these obstacles. The ever-reliable Peewee has been upgraded to a Warrior Class Kbot. You also have new fortifications and mines to defend your base.

Keep in mind that Core has the beacon!

To complete this mission you must destroy all Core units, and clear the minefields.

There is a Core base at the top of the map with an Aircraft Plant and Kbot lab. To the east it is heavily defended by heavy lasers and a plasma gun behind fortification walls, and the whole of the right side of the map is one big minefield. Expect regular sorties by groups of Kbots (including Mortys) and Level 1 aircraft.

Although the main entrance to the base is heavily defended, there is a back door that is much easier to crack. Go to the centre of the map and turn left, and there is a rough path west to the back of the base. It's slow going and you will have to fight your way in but once the factories and construction bots are killed you can Merl the main entrance to the base at your leisure, and then clear the minefields. Be sure to build Samsons, missile towers and Flakkers to keep the Core airforce off your back, and try to attack just after they have launched an attack, to minimise the number of ground troops in their base.