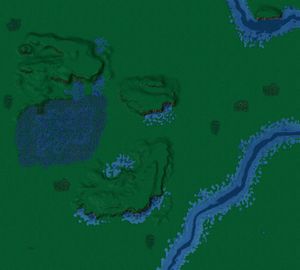 Hydross is under Arm control. Core units search this world for a device - a beacon of alien origin.

The thick jungles and bogs on this world will make travel difficult. Core has developed hovercraft technology in order to maneuver more efficiently on Lusch. That technology would make our search for the Contingent Commander and the alien beacon much easier.

Priority Critical:
Find and capture one of the hovercraft manufacturing platforms. Take special care that your units do not destroy the platform in their enthusiasm to destroy Core. Once the hovercraft platform is captured use it to build hovercraft units to aid you in clearing the area of all Core mobile units.

Info Feed:
You will have the use of the new Maverick kbot as a bodyguard, and an amphibious model kbot, the Pelican, to add increased mobility. Tech has also delivered a new gun, the Flakker, for anti-air defense. Core will also have a new anti-air flak gun.

To complete this mission you must capture the Core hovercraft pad and destroy all Core mobile units.

There's a lightly defended Fusion Reactor in the top-left corner, a well-defended Aircraft Factory and resource gatherers top-centre, the Hovercraft Platform centre-right and an Advanced Vehicle Plant across the river in the bottom right which churns out Crock amphibious tanks. There's also a few small ships on the river, and some Pyros near the Commander at the start of the game.

After the Pyros have attacked from the north, the main threat is Crocks, missile hovercraft and hovertanks coming down two routes from the hovercraft plant to the northeast of your base, and to a lesser extent along the path from the east. There's also some heavy tanks in the first waves. Expect heavy air bombardment from the start - build several Defenders and then Flakkers when you get Level 2 construction units.

You'll want some Flash tanks for the initial defence of your base but they are relatively less useful against hovercraft than other enemies, their high speed is less of an advantage in forest and swamps and they struggle to get within range before being killed. You need an Advanced Vehicle Plant to produce heavy tanks that can defend your base and then go on the attack, plus an Advanced Kbot Plant to churn out Pelicans to clear out the river area and then attack the Crock plant across the river. A Guardian can help in this area - or two, a defensive one on the path towards your base that can clear out the near shoreline and then an "attack" Guardian or some Merls on the river bank.

You can either attack the Crock plant first or go for Core's resource base instead. First send a force up the left edge of the map to destroy his Fusion Reactor. Then use Merls to eliminate the lasers/Punisher guarding the Aircraft Plant top-centre and send in tanks to kill it and the solar collectors nearby. Use the Merls to destroy the heavy lasers around the Hovercraft Platform and send the Commander to capture it.

The number of flak guns around Core's bases means that the role of air power is confined to scouting and fighter patrols to keep the bombers away. You also want to take down the radar plane near the Hovercraft Platfom before you attack the Punisher near the aircraft plant.

There's quite a lot of metal deposits hidden in the forest near your base - a few D-guns should show up some of them. <g> It's worth building several Level 1 construction units to keep up with repairs between attacks and to build up your base defences. Aside from air defences, in particular you'll need heavy lasers and (eventually) a Guardian covering the northeast of your base, east of the big swamp.