Narration: Minerals were the prize of Barathrum, and the Arm was mining them at a phenomenal rate, often using equipment which had been captured from the Core during the occupation of the planet. The Core Commander realized that the key to a successful campaign on the boiling world would be to halt these operations, cutting the Arm off from the metals it so desperately needed. Troops were mobilized with a simple strategy: search and destroy.

Intell-tap Pushing the Arm insurgents off of Core Prime is only a beginning. Arm has a base to the north. Expect to be attacked by Arm air units. Core air units will serve as a useful counter-measure.

Destroy the Arm base to the north. 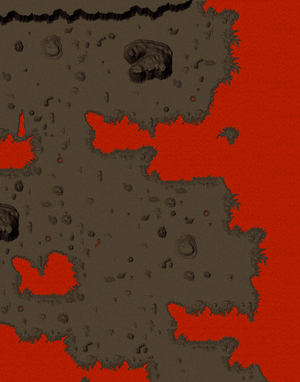 This mission is similar to the previous one, though the battlefield conditions are more favourable. The Arm base is near the northern edge of the base again, but this time they don't have an Aircraft Plant. You'll see some initial attacks from Arm bombers, but once they're gone, you won't have to deal with aircraft again. This means you can save some resources and only build the anti-air defenses you need to take out those bombers, and not bother with aircraft of your own unless you want them and are comfortable with your resource management.

Build right at your starting point: Energy Generators, Metal Extractors, and a KBot Lab (you may want to build the Lab first to get some Crashers started). Build a half dozen or so Crashers and align them in the flight path of the Arm craft. Remember to make repairs as needed, and reclaim the wreckage when you finally eliminate the enemy craft.

Start your Fink on patrol just north of your base so you have some warning of the incoming bombers, and any further Arm attacks. Once the Crashers are ready and defending your base, use the Fink to seek out additional resources, especially energy nodes and geothermal vents. Get that energy coming in as soon as possible.

Get some Storms built as soon as you have energy coming in and Crashers defending from air attacks. There will be KBots, including the occasional Zeus and Fido, coming after you shortly after the bombers. You'll want to build a Vehicle Plant, Construction Vehicle, Advanced Vehicle Plant, and some defensive towers (LLTs, HLTs, Punishers).

When the offenders start to trickle off, prepare to bring out a full counterattack, as in the last mission. Build your Diplomats and Reapers, fill the force out with some KBots and whatever other vehicles you have ready. Wait for their next attack, and push your forces all the way to their base. Once again you can hold back and build some Radar Towers to target the base defenses. Pick off the towers with your Diplomats, defend them from any Arm attempts at counter-attack, and start rolling your forces in for cleanup when the time is right. Remember to watch out for overzealous fire from the Diplomats if you push your other units in.

If you find yourself staring at a smoking crater where the Arm base used to be and the mission will not end, it's time to send your units out roaming to find the last cowardly Arm units hiding in the corners. Take control of a small group of units to hunt areas that aren't being covered by the roamers, or areas you think a unit might hide. Once the map has been cleansed of the Arm your mission will end.