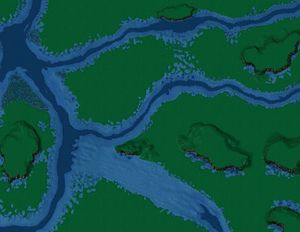 Solidify your defenses. Once the base is secure, search for and find the alien artifact that must be in the area.

Priority Critical:
The alien artifact must be found if it exists. We do not know what secrets it may hold - but it must not fall into Core hands.

Info Feed:
Despite our efforts, Core remains strong. Their activities have taken on a certain desperation. The beacon must be near!

Increased encounters with Scorpions lead us to believe that the beacon is very near.

To complete this mission you must capture the beacon and destroy all Core units and Scorpions.

The Beacon lies in the lower-right of the map, on a peninsula that is swarming with Scorpions. The Core hovercraft Platform lies to the north on the right edge of the map, and an Advanced Kbot factory churning out Mortys lies at the western end of the same piece of land, opposite the island. There's a Punisher up that way too. On the small piece of land at the bottom of the map is an Advanced Vehicle Factory producing Crock amphibious tanks.

This mission follows on from the previous one, so you start on the former Doomsday Machine island, on the left of this map. Your initial problem is to survive the air attacks - select all your units with Ctrl-A and get them up onto the island, then build light laser towers or missile towers to beat off the planes if you've not got any anti-air units. Having done that, you can start building metal and energy production.

You should start with a Kbot lab to produce some cheap defensive units and then a couple of Construction Kbots. The next priority is a Hovercraft Platform producing primarily hovertanks, to patrol east of the island and beat off attacks. A group of several Mortys can be a real threat to your position early on, fortunately they tend to be fairly stationary so can be taken out with a Wombat missile hovercraft, or a Guardian. It can be worth building a sonar south of the main invasion route, to help warn you of approaching Crocks. As you stabilise the situation you can build an Advanced Kbot Lab, to produce an Advanced Construction Kbot and then Pelicans. An Advanced Radar Tower will help aim a Wombat at the Punisher, and the Pelicans can be used for hit and run raids as required. Once you have destroyed all the Core units you can start on the Scorpions, and then capture the Beacon between the two hills centre-right.

Go to top
← Through Bog and Swamp | The Beacon | Temblor - Earthquake →