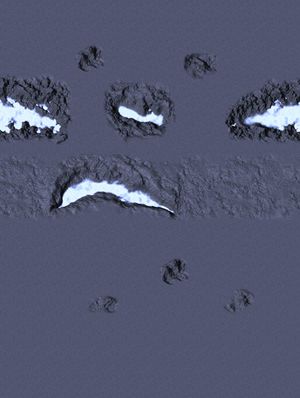 There is a Core base to the north, Core's final outpost on Temblor. If the Core Commander and the beacon are not there, they must be on Gelidus. We must finish here ASAP.

Priority Critical:
We have pursued the last of the Core units to their fortress. If the Core Commander is among the units there, so much the better... but we fear that he has left the planet already...

Info Feed
Techno Advancement: The new AI targeting facility is now available. When used in combination with advanced radar can be very effective as it allows your units to automatically target enemy units using radar.

WARNING!
The targeting facility requires an enormous amount of energy. You will want to turn it off until you have sufficient energy.

To complete the mission you must destroy all Core units.

This level features one of the biggest Core bases of all, with multiple factories spewing out dozens of units to send against your forces, and heavy fortifications. The factories are spread out across the top of the map, with an Advanced Vehicle Plant and a few others concentrated towards the top-left. The two gaps between the cloud pits are fortified in a similar way to the "front door" of the base in Temblor-Earthquake! - multiple heavy lasers behind fortification walls with minefields in front. Fortunately the minefields are confined to the level above the two ramps. There's a few Diplomats and a Punisher plasma cannon guarding the top of each ramp. At regular intervals Core will send mixed raiding parties of 10-20 units, mostly Level 1's with a good proportion of long-range Slashers and Mortys, plus the odd Can.

This is a level for the Big Bertha/Advanced Radar Tower/Fusion Reactor combination, you want to take out as much of the Core base as possible at long range. However in the first instance you will have your hands full just fending off the raiding parties, you can dedicate a Vehicle Plant just to turning out Flashes for defensive duties and to go on the offensive you will need to match Core's multiple factories.

This map is so big that a Bertha at the bottom of the map cannot cover the top of it (which is where the factories are), ideally you want to have her somewhere near the left-hand of the three blobs in the lower part of the map. However you may have to compromise a bit between covering all of the base and keeping her out of harm's way - the same is true of the radar towers which have even shorter range than Bertha. Still you don't necessarily need full radar coverage for Bertha to do her stuff - there's so many targets up at the top of the map that even random firing has a good chance of hitting things. Also if you have Bertha on a hot key and see targets during a tank attack, you can select Bertha without moving from the target area, and aim her at anything you've seen. If you use the Targeting Facility, it's a good idea to have that on a hot key too, so you can quickly toggle it on and off.

The other unit that comes in useful on such a big map is the Dragon's Tooth, to concentrate Core's mobile units into kill zones. Once you're in a position to start going on the offensive, you want to send attacks up each ramp to knock out the Punisher and Diplomats at their top. It's a waste of time going any further, you'll just hit the minefields and Gaat Guns. Once you've cleared those out, you can block off one ramp completely with a line of Dragon's Teeth, and put partial lines across the other (the wider, right-hand ramp gives more room for this) to slow Core's descent down the ramp to maximise your firing chances. The AI just wants to follow gravity, so gets particularly confused by slight diagonals with the lowest point closest to the route it wants to take, down the centre of the map. Use a "Christmas tree" design with the shortest diagonals at the top so that they can "fall into" longer diagonals below, then set up a Guardian and some heavy lasers to cover the bottom of the ramp and they should have some fun. You will need good air defences, a jammer and construction units for repairs.

You will face some Level 2 aircraft, which you will need to defend against with Samsons, missile towers, Flakkers and aircraft. The Core base has such heavy air defences so that it is suicidal to take any aircraft north of the big cloud pit, you can bomb the Punishers at the tops of the ramps but go no further than that. Brawlers can help reduce the raiding parties but given that the raids have several Slashers, Brawlers are best used as a mobile reserve rather than as the main defence.