The following are the missions in the ARM Very Short campaign. 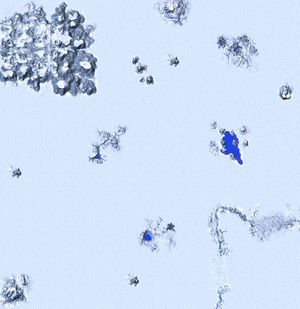 Mission Briefing: Emergency! The forward base has been demolished by strong Core counterattacks. As our escorting units have been destroyed, you must attempt your return to friendly lines alone. The Core has air dominance so no aircraft are available to escort you in.

Survive the enemy attack and destroy all Goliaths. You must reach the southwest corner of the map to win this mission.

Suggestions: Use your D-gun to destroy concentrations of enemy units.

Battle Tactics: Sometimes the Commander is slow when precisely targeting an enemy unit with the D-gun. In order to take faster shots, try firing your D-gun at the ground just in front of the enemy units.

Hit D to activate the Commander's D-gun, then left-click on the ground near your target. 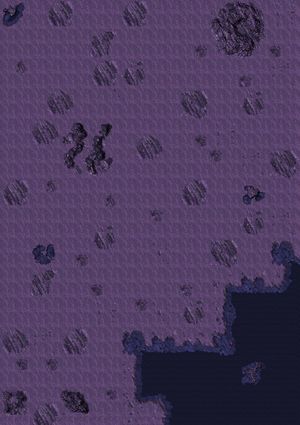 Mission Briefing: After our successful attack on the Opal Lakes, we have few Brawlers left in good repair. These units are available to destroy the forward Core base on the Amethyst Plain.

Your mission is to search out and destroy the enemy Aircraft Plant. Accomplish this quickly as you have few defenses against enemy fighter craft. The plant is located in the southwest corner of the map.

Suggestions: Beware of the enemy Cobras. They can destroy your aircraft very quickly.

Battle Tactics: The easiest way to target enemy fighters is to use your radar map. Select your attacking units, press the ATTACK button, and then left-click on the enemy fighter's radar blip. 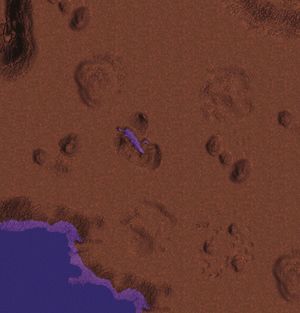 Mission Briefing: Several light Core vehicles have infiltrated the area. You are ordered to build a Metal Extractor on any available ore deposit. Destroy all enemies in your path.

Suggestions: Keep exploring to find the metal deposit. The nearest one is located just north of your starting location. You have a Fusion Reactor so energy should not be a concern.

If your Fusion Reactor comes under attack, return quickly to save it from destruction.

Battle Tactics: To build a structure select your Commander and click on the BUILD button, (just below the radar map), activating the Commander's build menu. This menu displays the units the Commander is capable of building. (Units unavailable in this mission will appear grayed out.) Left-click on a unit picture and move your cursor over the main map. A green box will follow your cursor around the map. Left-clicking again will place the structure on the terrain.

You cannot place a unit if its outlined box is red. Most likely the location you selected has rough terrain. Move your cursor around the map until the outline turns green again. 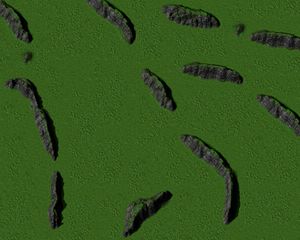 Mission Briefing: Erosion has left the Vulcans Forge area a maze of tall, narrow rock ridges which channel and constrain the movement of military units.

The Core swept through the region, destroying our factories to save a single Vehicle Plant. This plant's build capabilities are severely limited.

You are ordered to preserve the Vehicle Plant and destroy all attacking enemy units. No reinforcements are available -- you are on your own.

Suggestions: Use the trajectory rockets from the remaining Merls to fire over the ridges.

Battle Tactics: Holding down SHIFT while clicking on a factory's build menu will queue up five units at a time. If a picture is grayed out, that unit is not available in this mission.

Keep your Merl rocket launchers at long-range, behind ridges, if possible. You will need other units to spot for your Merls.

There are only two entrances to your base. Try to have several units firing at the enemy as they push through a pass. 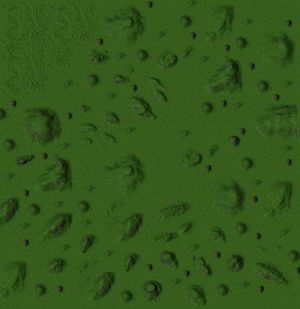 Mission Briefing: Emergency! Our energy production base in the dense forests of Caladon is under attack. The Core have sent a wave of Roaches in an effort to destroy our base.

Protect the Geothermal Power plants from destruction. Do not leave a single Roach intact.

Suggestions: Use your Fido to attack Roaches at long range.

Battle Tactics: It is useful to target the incoming Roaches at long range using the radar map. Enemy units appear as red dots. 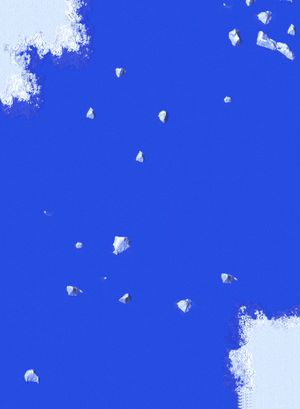 Mission Briefing: We intend to launch an air strike against the Core forces south of the Ansapp Sea in a few minutes.

Move south and destroy all surface ships with the ability to target aircraft. Also, you have about five and a half minutes to escort the light carrier to the south end of the map. Don't let the Core destroy it.

Battle Tactics: Keep your carrier within the middle of your battle group not only for its protection but for its radar. Your battleships and cruisers can target enemy units on the radar map. 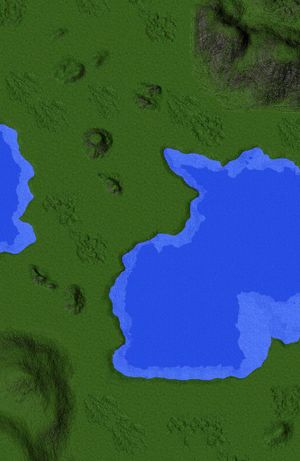 Mission Briefing: Our advance has managed to isolate a few Core units between the two Sapphire Lakes.

Your orders are to sweep through and clear the area. Destroy all enemy units.

Suggestions: Use the long range of the Fido Kbots to your advantage. The enemy hopes to keep scouts in the area as long as possible so beware of light units hiding in odd corners.

Battle Tactics: You can select several units at once. Click and drag to form a box outline around the units you wish to select. When you let go of the mouse, all the units contained within the box will be selected.

Mission Briefing: We believe that the Core have set up an air base north of the Nhanons River. Seek out this base and destroy it.

Take your band of Kbots across the ford and destroy the Core Advanced Aircraft Plant.

Suggestions: Spread out your anti-aircraft units so the angle of attack varies. This will improve the chances of getting hits while minimizing the damage taken from enemy aircraft.

Battle Tactics: Construction Kbots can repair damaged units. To do this quickly, select the construction unit, press M, then left-click on the damaged unit you wish to repair.

If you are using the right-click interface, select your construction unit and then right-click on the damaged unit. 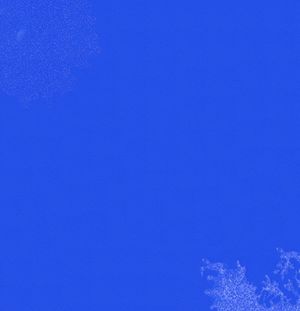 Mission Briefing: One of our scientists has developed a rugged instrument package that must be anchored to the ocean floor. Comparing seismic p-waves with data from nearby sonar stations, it can detect the approximate location of enemy submarine bases at long-range.

Although we have attempted not to draw attention to this facility, the Core has become suspicious. They have knocked out most of our subkillers with a torpedo bomber attack. Intelligence reports a sub fleet on its way to finish off your small force.

Your orders are to destroy all of the enemy subs with your Piranha and avoid having the seismic detector or the Sonar Station destroyed.

Suggestions: Move across the enemy path so incoming torpedoes miss you astern.

Battle Tactics: It is vitally important that you fire before the enemy subs come within visual range. Use your radar display to fire at enemy units outside of your visual range.

Note: Unless your Piranha fires automatically, your sub will stop moving when it fires. Once it launches a torpedo, start it moving again immediately. 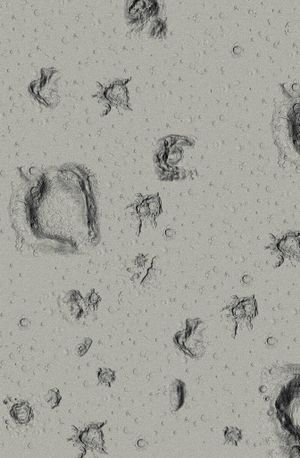 Mission Briefing: The Core is attempting to convoy a group of Construction Vehicles to the Hammerhead Impact Basin. A small force of odd units has been collected for you to command. Keep the enemy from reaching the northwest corner of the basin.

Destroy all Construction Vehicles at any cost.

Suggestions: Position yourself on the axis of the enemy's advance and create an attack zone by placing your long-range units behind your heavy fighters.

Battle Tactics: To select all units on the screen, press CTRL + S. 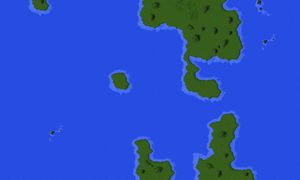 Mission Briefing: The enemy has fortified the narrow passage into Groshen Bay. We need your Hulk transport ship and the Advanced Construction Vehicles it carries to further our war against the Core.

Move your troop transport containing the Advanced Construction Vehicles east through Groshen Strait. You have twenty minutes to accomplish your mission.

Suggestions: You must coordinate the various forces in order to be successful. For example, use your warships to destroy the anti-aircraft guns, then attack with your Brawler gunships.

Mission Briefing: Destroy the Core's Fortitude anti-missile battery, allowing us to launch nuclear strikes on the region. You have a strong air wing composed of Brawlers, Hawks, and Phoenixes.

You have exactly twenty minutes to find and destroy the Core's nuclear defense.

Suggestions: Note that the lava spires can interfere with enemy shots at your forces.

Battle Tactics: If a construction unit is ordered to guard a factory, it will help the factory build units faster. 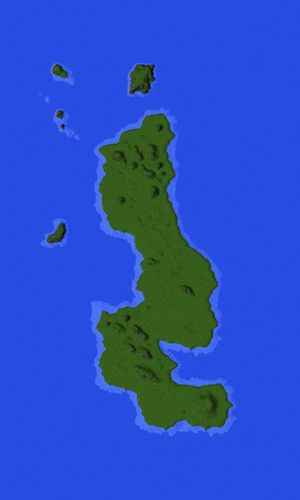 Mission Briefing: Kaki island is an ideal location to build an air base in our war against the Core.

Clear the enemy from the island and capture the Geothermal Power plant constructed by the Core.

Suggestions: Attack aggressively as the enemy is only now starting to build up its defenses. Do not lose your transport. It is loaded with Bulldogs.

Battle Tactics: Your Commander can walk underwater to Kaki Island (the large island just to the south).

If there is a message that one of your units is under attack, you may press F3 to select it and center the screen on the unit.

Mission Briefing: Mesa 368 is of vital importance to both sides. The fighting across Hyenbacku Ridge has been particularly intense. We have been slowly driven back by the Core forces.

Although intelligence reports regarding enemy deployments have proven reliable, multiple air assaults were easily countered with dozens of Cobras, leaving further air assaults futile. Our Aircraft Plant is programmed to send its planes on a defensive patrol.

Intelligence reports that the Core is preparing a massive air assault scheduled to begin in approximately 30 minutes. You have that long to destroy their Intimidators.

Do not let the Core destroy your Fusion Reactors as they are the main source of power.

Suggestions: Use your Fortification Walls to provide cover while working. Building Berthas on the westernmost cliffs will keep the enemy Intimidators within range.

Battle Tactics: It is possible to setup patrol routes for your factories. To do so, select the factory and press the PATROL button. Hold SHIFT and click on the map to create waypoints. Every new unit produced by the factory will patrol through all the waypoints and back to the factory in a continuous loop.

If you wish to cancel the patrol orders for a factory, select the factory and press the STOP button.