Narration: The Arm commander had affirmed foothold on Rougpelt, but defensive fortifications were strong as result of the Core's lengthy occupation of the planet. They would be difficult to overcome. And now, there was a new threat - the Core had built a powerful nuclear missile silo, which was about to become fully operational...

Core has built a nuclear missile silo! Locate the silo and capture it.

Priority Once again Core has raised the ante. Energy emissions indicate that they have completed construction of a large missile silo in this area. The silo is thought to contain missiles with nuclear warheads. We must capture the silo, not only to remove the threat, but also to gain the technology that it represents.

Info Feed The silo is sure to be well protected, and may be found on what is known as Brooban's Isle. A combination air/sea force will be most effective.

Be prepared for meteor showers. 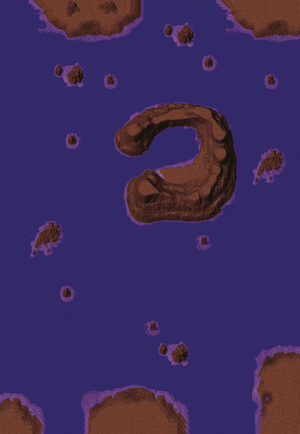 This mission starts with a small group on an island in the southeast. Initial efforts should focus on spreading out to the two other islands on the southern edge of the map in order to secure resources and build up forces for the assault.

Build an Aircraft Plant and several Lurkers. The Construction Ship should start building a Sonar Station and Torpedo Launchers to defend the island. The Crusader and Skeeter can help defend the Shipyard if the Torpedo Launchers aren't ready when the Core Searchers arrive. The Jethros should be able to handle initial assaults from Core's air units. Keep a solid group of AA units near the Commander and if necessary build an Eraser to stay with him.

When the Aircraft Plant is finished and the island is fairly secure, send a Construction unit (and/or the Commander) west to the next island to clear the island of plants and debris (to gain resources and make room for new construction). When the first island is cleared, continue to the third island. Setup Solar Collectors and Metal Extractors on all three islands. Patrol in front of the three islands with Lurker subs to prevent attacks from Core Enforcers. Build an Advanced Shipyard and continue building more naval units for defense and in preparation to assault Brooban's Isle. Start producing Piranhas, Rangers, Conquerors, and a couple of Millennium Battleships as soon as possible. Build a Construction Aircraft, which in turn will build an Advanced Aircraft Plant. Building a strong air force will be secondary to a strong navy, but is still essential.

The Core will throw a combination of units at the southern islands: Executioners and Sharks will probe defenses, Warlords, Hydras, and the occasional Crock will all make their way south to attempt an assault.

Surround the Millenniums and Conquerors with Lurkers, Piranhas, and Rangers to protect them from attack while patrolling the waters near the islands. They will be crucial in targeting the Punishers on the main island. The Advanced Aircraft Plant should produce Lancets in addition to the usual Hawks, Phoenix, and Brawlers that make up the ARM air forces. The strong naval contingent of the Core forces will be especially week to the Lancet's torpedoes. Once air superiority is established, the Phoenix bombers should be able to take out the southern-most Punisher on Brooban's Isle, allowing the naval forces to move closer.

The naval units can help the bombers take out the remaining Punishers with some careful control of their targeting, just be wary of destroying the silo. Keep Construction Ships mixed in with the naval units to repair any damage they take in the assault. There are more Punishers along the northern side of the island, and there are plenty of naval and air units to neutralize before bringing the Commander forward to capture the silo. Carefully clear the enemy defenses and take control of sea and air, and keep a defensive group with the Commander in transit. Capture the silo to complete the mission.

Go to top
← Stockpile at the Abutment | Fortress at Brooban's Isle | Vengeance! →