Narration:It was during the conflict on Empyrrean that Arm scientists made a dramatic breakthrough with a new type of all terrain tank. The control brain tissue for these vehicles was hybridized with clusters of nerve cells from spiders. This allowed them to overcome perceptual difficulties which had previously made such a complex modes of locomotion impossible. The new spider tanks would give Arm the considerable advantage on difficult terrain.

Objective: Secure the Spider ATV units. One Spider must survive. Bring one of the Spider Tanks back to your base.

Priority 1 A group of the experimental Spider ATVs have been isolated behind enemy lines. The Spiders are armed with an effective paralyzer weapon, but will depend on your units to clear a path for them. The Spider's paralyzer weapon and superior Spider technology must not fall into Core hands.

Info Feed Core has numerous patrols searching for the Spiders. Build your base quickly, and secure a Spider Tank. 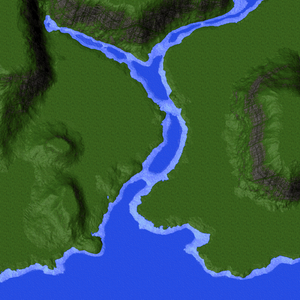 There are a number of Core units wandering the map, roughly 2 dozen on either side of the river, but no Core base to deal with. You're going to want to build up a small base quickly to turn out KBots, build up a large enough force to retrieve at least one of the Spiders, and guard the Spiders on the return trip.

First, select the Spider KBots and assign them to a group so you can react quickly if they come under attack (or when it's time to move them to your base). You may also want to move them as far north as possible, to prevent them from being spotted by patrols.

Order your Commander to build your metal extractors and solar collectors (again roughly 3 of each, remember to queue your build orders with the Shift key). Queue up your KBot Lab while you're at it. Once the Lab is complete, build roughly a half dozen each of PeeWees, Rockos, and Hammers.

Eventually a unit will wander into your base, and it's fairly common for a unit (often an A.K. or Weasel) to find your Spiders at roughly the same time. Make sure to keep an eye on your Spiders (since they can only paralyze enemy units). Take out any invader in your base as quickly as possible with concentrated fire.

Once your Spiders are discovered, you'll have to move whatever units you have north while also moving the Spiders south. There's a concentration of enemy units on the top of the ridge along the eastern edge of the map that will do a lot of damage to your units if you wander into them (so try to avoid them). Your best bet is to spread your units into a north-south line between the river and the ridge to take on the patrolling units on the eastern side of the map and move the Spiders along this line. Pull your defending units in behind the Spiders and send out reinforcements from your base as they're produced (move your Commander with the Spiders once they meet up to protect them).

Once you get your Spiders near the barrier, it's easy enough to finish the mission by moving one behind it. If you want some more practice before moving on, though, start eliminating enemies on the eastern half of the map while building more KBots (or build a Vehicle Plant and start building vehicles to get a feel for the capabilities of the different units). Keep the Spiders near the Dragon's Teeth, though, in case you need to put a quick end to the mission.