Narration: Using the advantage of surprise, the Arm commander set back the Core line on Thalassean and established a beachhead at Larab Harbor. Meanwhile, however, Core forces on the rest of the planet had had a chance to regroup. They were certain to attack...

Defend Larab Harbor. Preserve the Moho Mine there. Destroy all Core units.

Special Priority The Arm stronghold and supply depot assembled at Larab Harbor must be preserved against all Core assaults. Metal is so rare on Thalassean that the Moho Mine at Larab must be protected at all cost. Should the Moho be destroyed, you will have failed your Mission.

Info Feed We have reason to believe that there is a Core fleet hiding within a hurricane moving toward Larab. Be prepared! The Enemy is sure to target the Moho Mine. 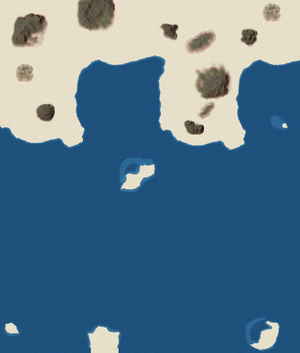 Map for Core Campaign, mission 07: The Defense of Larab Harbor

An Enforcer and Hydra will arrive to give you a headache right away, followed by Searchers and Shadows. Move your Ranger south a little to avoid becoming a sitting duck. Move the Skeeters and Crusader towards the incoming Core naval units. Move some Jethros and a Samson towards the west end of the base to defend against the Core aircraft.

The Construction Ship should move from the Advanced Shipyard to reclaiming shipwrecks and building Torpedo Launchers at the entrance to the harbor. Be careful and keep some subs defending the Construction Ship, because the enemy ships aren't going to stop coming just because you want to build something in their path. The Commander needs to work on keeping resources coming in (build Solar Collectors and Wind Generators, reclaim metal), and the Construction Vehicle handles repairs and building defensive structures.

As things continue, you may want to build one or two more Construction Ships to reclaim shipwrecks and keep metal coming in. The balance between building enough advanced units and defensive structures and bringing in enough resources to support the building may be hard to maintain when taking wave after wave of Arm naval units. At this point it's often important to remind yourself that you're building a defense, that the Moho Mine must survive the mission and that this map is covered with Core units.

Keep a lot of ground units available to defend the Moho Mine if amphibious units break through the defenses. Keep Construction units and the Commander available to repair it. Continue building up defenses and let the Core come to you. If the Core attacks seem to stop without the mission ending, send out a group of ships (don't forget the subs to defend them) to hunt down whatever Core units are sleeping out there.