Narration: CORE PRIME - center of the Core empire, was a bleak, metal graveyard. Organic life had been extinguished long ago... in the stillness, the low hum of electricity could be heard everywhere, emanating pirmarily from the massive computers which lay beneath the planet's surface. The outcome of the fighting here will determine the fate of the galaxy.

Destroy all Core units in the area. Establish a secure foothold on Core Prime.

Priority Critical Establish a base as quickly as possible, to defend against counter attacks. Then scour the area for any remaining Core units. We will use this beginning to bring about Core's ending!

Info Feed Core Prime is a world encased in metal. A metal extractor will extract metal wherever it is placed. Metal should not be a problem, Core resistance will be! Move swiftly to eliminate all Core units, plants, and labs. 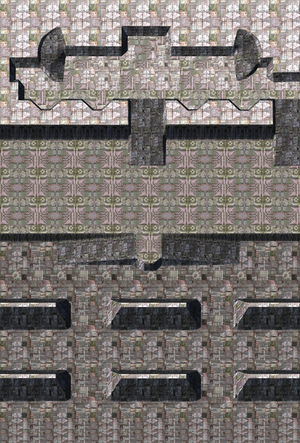 Either one works if done well, but the quicker option is certainly risky, and can result in a quick loss. It's a gamble that largely depends on deciding when the mobile forces being used to defend the base are strong enough to mount an effective offensive. If the forces can be built fast enough, it's possible to take on a significantly smaller Core defense and put a quick end to an otherwise lengthy battle.

The first step in either strategy is to capture the Core buildings (and possibly the Construction KBot) to the northeast of the starting point. Once captured, use the resources to build a base along the northern edge of the map to start producing a significant force of tanks and aircraft. Start by building a Radar Tower, followed by a KBot Lab, Aircraft Plant, and a Vehicle Plant. Build Construction Units to start building Advanced Plants quickly, and follow them with PeeWees, Hammers, Rockos, Flash tanks, Stumpy tanks, Samsons, and Freedom Fighters.

Core ground attacks will eventually start coming up the middle of the map, heading directly toward the Galactic Gate. Move defensive KBots out in front of the Gate, followed by Flash and Stumpy tanks and Samsons. This will become a strong focus point for the defenses, as well as a staging point for an offensive assault. Set Freedom Fighters to patrol the width of the map in front of the base. Fly scouts (a single fighter) to the bottom-right and center (of the bottom edge) of the map to reveal the Core production centers.

Build defensive structures, working up to Big Berthas, to help push the perimeter back from the Gate. Artillery units should support defensive units from above. Start building Sentinels, Guardians, and Defenders around the Gate and start putting Erasers and Jammers near important structures to keep them off of enemy radar. Build Advanced Radar Towers quickly, and keep the Commander reclaiming metal and assisting Construction units. A Fusion Reactor and Moho Mine should be in the cards for a defensive strategy, as well.

As soon as possible, start producing Phoenix bombers, Hawk fighters, and Brawler gunships (at an Advanced Aircraft Plant). Using a half-dozen or so each of Hawks and Phoenix bombers, attack the Core Aircraft Plant (which should have been located near the bottom right by scouts earlier). These assaults should continue (and depending on the level of success, expand) for the remainder of the battle, disrupting enemy production as much as possible.

As bigger defensive guns are built and enemy attacks have less success at moving towards the Gate, it should be possible to start offensive runs with KBots and Vehicles moving straight down the middle of the map, hitting the enemy base just behind a quick bombing run on the intended target area. Three to five large groups of Bulldogs, Stumpy tanks, Merls, and other ground forces should be able to produce an end to this mission. Just remember to keep a defensive group near the Gate and support the assault forces with Big Berthas and bombing runs.