Total Annihilation: The Core Contingency/Rock and a Hard Place 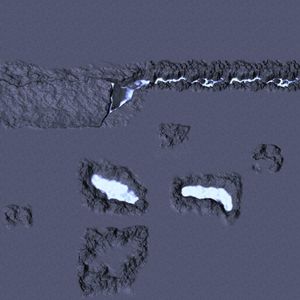 Zipper scouts report that the Core has hastily fortified above the ridge to the north. Though the earthquakes continue to hamper our advancing units, remember that Core is damaged by the tremors as well. If only we could time a strike to coincide with such a tremor...

Priority Critical:
Core is playing a stalling game. We must destroy the units to the north, and be absolutely certain that the Core Commander is not on Temblor. Core is certain to salt the area with its mines. Clean up the minefields as you progress.

Info Feed:
The use of land mines can work as well for us as it does for Core. A mine-layer vehicle has been provided to help establish your perimeter defense.

To complete this mission you must destroy all Core units.

Core has no factories on this level. They will send groups of light tanks initially, with the odd aircraft in support. There is a cloaked minefield between your starting position and the ramp up to the top left corner. This ramp is covered in Level 2 units - Reapers, Cans etc with Diplomats at the top. There are wind farms across the top of the map, with a construction bot, missile towers, some Slashers and other units to guard them.

A perfect place for a Flash rush - this level is fun. :-) You may have to fend off a few initial attacks, meanwhile build metal and energy extractors - there is plenty of metal in the fissure to the left of your starting point. Then build a Vehicle Plant and Advanced Vehicle Plant. While the Vehicle Plant turns out 30-40 Flash tanks and a few Samsons, an Advanced Construction Vehicle builds an Advanced Radar Tower to show up the minefields. Start to clear the minefields north and west of your base, and replace the one in the northern path with mines of your own. Leaving a few behind for base defence, take your Flashes and Samsons west to the left edge of the map, clearing mines as you go. Then head north up the edge of the map. Once you come under fire, abandon mine clearance and just charge through the remaining mines and swarm over the units on the ramp. Don't worry about the Cans, you want to get the Diplomats at the top of the ramp. Once the long-range units are dead, you can come back down the ramp to finish off the tough nuts.

The Reapers will go to attack your base via the path between the two central cloud pits - be prepared. Meanwhile you may want to repair your Flashes and/or wait for reinforcements, or just head back up the ramp and go from the top left corner to the top right, cleaning out all the missile towers and other units there. On the way back, you can take care of the windfarms, which will force the mines to uncloak and make clearing them an easy job.