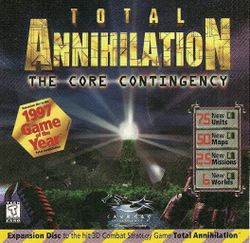 Total Annihilation: The Core Contingency is the first expansion for the futuristic real time strategy game Total Annihilation. The expansion contains 75 new units, 6 new worlds, 50 new maps, and 25 new missions. The primary focus of the expansion is continuation of the storyline from the original game, picking up from the end of the Arm missions.

The expansion also adds native inhabitants to various planets and new natural disasters, both of which may prove dangerous. The multiplayer maps included in the expansion include new environments. As is often the case with expansions, there are also a number of bug fixes included (also included in separate patches for the original game).

he Core Contingency picks up where the original game finishes with the Arm ending, in which the Arm achieved final victory over the Core in its homeworld Core Prime, in their Galactic War of over 4,000 years. With the Core supposedly wiped out of existence, the Arm undergoes one-hundred years of reconstructing civilization. However, a lone Core Commander survives, hidden away in a distant system. The Core Commander, the heart of the Core's Contingency plan in case the Core would ever be defeated, is charged with a single mission: to search for a powerful and ancient alien artifact hidden in the region. With modifications, the beacon could supposedly be converted into an Implosion Device—a single, phenomenally powerful superweapon which, when activated, would cause the entire galaxy to implode into itself, with the Core's pure intention to permanently extinguish the Arm. The Core Commander would stay inside the gigantic machine as it causes the galaxy to virtually self-destruct, then step out unscathed and rebuild the entire Core race.

Meanwhile, rumors circulate amongst the mending Arm over said Contingency Plan, so an Arm Commander is dispatched along with sizable reinforcements to confirm or eliminate the gossip.