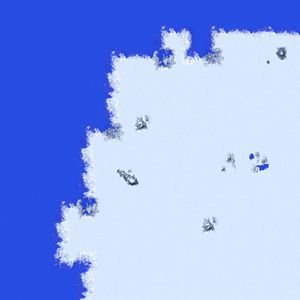 Gelidus is the last world in the system. The Core Commander must be here somewhere! A landing zone has been cleared for you on an ice floe. Move quickly to establish your base there.

Priority Critical:
You must establish a secure base on the floe and withstand the Core assaults that are sure to come. Once we are established on Gelidus, we can begin our final push toward the mainland in order to stop the Core Commander. Core may have patrols offshore. Eliminate them as well.

The powerful winds of Gelidus pull the snow off the glaciers and compact it into enormous hailstones. When their weight is too great, they fall in devastating storms. Be ready to make repairs to your units as necessary.

The new "pop-up" units will serve you well on this world. They are nearly indestructible when they are retracted.

There is an abandoned Core unit dump nearby that you can reclaim for metal and use to establish a base. Metal deposits are rare on the ice floes - make the most of the reclaimed metal.

The Moho Metal Maker will also provide ample metal for your defenses on this barren world.

To complete this mission you must destroy all Core units.

This level is a fun one where there's lots of units to kill but not much grinding away at Core bases. Units pre-positioned on the ice floe include lots of hovercraft, some Level 1 Kbots, the odd Can and some Freakers. The Freakers tend to patrol the north of the floe, the rest will be used in waves of attacks against your base. There's also an extensive naval fleet including battleships, and a fair few Level 2 aircraft which use the carriers offshore for repairs. However the only structures are a Hovercraft Platform protected by a single pop-up laser on the coast west of your starting position, and a Seaplane Platform in the square bay in the northern shoreline, protected by a pop-up and some regular heavy lasers.

Of all the Gelidus missions, the hailstorms on this level are the worst in duration and intensity. They're really trying to teach you a lesson about having several construction units patrolling to repair damage!

The main threat axis is to the northwest, so build your base accordingly. Build a Kbot lab to churn out defence units economically, and get Moho mines on the metal deposits as soon as possible. There's another deposit out of view to the south, and a collection of wreckage to the northeast to keep you going until the Mohos are up and running. Expect attacks from up to a dozen hovercraft at a time, interspersed with the odd group of Kbots. It may be a good idea to draw a line of Dragon's Teeth from the bottom edge of the map southwest of your base, to stop Scrubbers in particular sneaking round the bottom of your base into your rear areas. You need to include several Jethros to fend off air attacks, followed by some missile towers. However even Flakkers struggle to shoot down Vamps, so once you've established your defences against ground attacks you need to get some fighters up in the air, preferably Hawks from an Advanced Aircraft Plant. You can start to extend the Hawk patrols northwards, but keep them over the ice or they'll end up above a Shredder anti-air ship, which is not good for their health.

Meanwhile you can go on the offensive. The first target is the hovercraft plant to the west, which may not be working quickly but is still a nuisance. To start with it is surrounded by lots of pre-made hovercraft - you can get an idea of how many on (advanced) radar, but by the time your are ready there will probably be just a few left. A dozen Flash tanks should sort them (and the pop-up laser) out - alternatively use hovercraft or Pelicans. Then sweep north to eliminate the Freaker patrols. It's safer to use missile hovercraft or bombers to take out the seaplane platform and its defences - it seems that any hovercraft that retreat from an attack end up clustered around it.

Then you just have the ships left. This is a fun opportunity to demonstrate the general awesomeness of hovercraft and Pelicans against naval targets! It helps to build another Advanced Radar Tower northwest of your base towards the coast, to tell you where the ships are - there's a metal deposit up there which you want to go northwest of. Once you've got rid of the Shredder(s) then your Hawks can start to chase the Vamps over the sea, and you should be done.