Narration: Just when it seemed that victory was at hand, the Core suffered a serious setback. Arm troops, fighting with stubborn desperation, blasted the Core line and breached it. Core forces, taking heavy casualties, were driven back, and finally regrouped on high ground. They were surrounded.

Intell-tap Arm has delivered us a minor setback. There is a high probability that they have expended more resources than was rational. Survive the coming onslaught and Arm will be nearly finished. 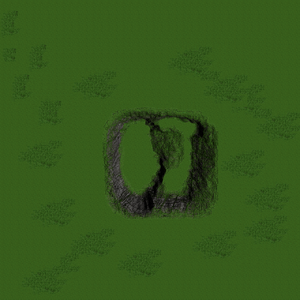 The Core forces start sitting on a small Mesa overlooking a vast plain featuring nearly every type of Arm unit. To make it easier, your units are also already damaged. Have the Commander build a Radar Tower on one side of the mesa, and the Construction KBot build one on the other. Once the towers are up, repair all of your units, and build Metal Extractors and Solar Collectors/Wind Generators. The radar picture should give your units plenty of targets to deal with in the meantime.

Start building a KBot Lab and an Aircraft Plant (probably best built on the southern side of the mesa), and look out for some Spiders coming up the western side of the mesa. Be ready for an attack from the north when the Lab is finished, and start building PeeWees to take care of a Merl that will start doing some damage fairly quickly (supported by Zippers). Move just under 10 PeeWees down the north side of the mesa to attack the Merl. Start building Avengers quickly to patrol over the mesa and fend off Arm air units. Some anti-air KBots will definitely be helpful, and be prepared to bring the KBots and the fighters to bear on a group of gunships that will be coming in.

If you haven't done so already, make sure your Construction KBot is on patrol to repair units as they're damaged. Build another Construction KBot and a Construction Aircraft, then get started building an Advanced KBot Lab, Advanced Aircraft Plant, and defensive structures (Gaat Guns and Pulverizers). Call in the Commander on the building projects, and put a Spectre up on the north and south ends of the mesa to jam Arm radar. Finally, build a Punisher near each Spectre.

Get some Vamps, Rapiers, and Hurricanes in the air, and Cans and Pyros on the perimiter. Watch for Merls and send your air forces after them before they do any significant harm. Once the perimiter is secure, patrol it with the air units, and remember to keep feeding new KBots to the lines. An Advanced Construction KBot (with some help from the Commander) would do well to build an Intimidator at this point. Keep feeding air units into the patrol in the sky as well.

Finally, move a group of units with the Commander north of the mesa to build a Vehicle Plant. Set the Plant to build a dozen Raiders and Slashers, and set them on patrol in the region.

Take your time cleaning up, maintaining unit production as you go. Start heading northwest and move either clockwise or counter-clockwise, supporting the tanks with air units. Keep the KBots on perimiter and the air units patrolling the skies around the mesa when they're not specifically needed to support the tanks.