Narration: Rougpelt was an inhospitable world. A frequent hail of meteors--actually pieces of Rougpelt's demolished moon--rained down destruction on the inhabitants at unpredictable intervals. Nevertheless, it had been a Core stronghold for over a thousand years before Arm invaders had been able to capture it. The Core Commander intended to show the Arm that the battle was far from over.

Intell-tap Destroy the guards at the Gate. Capture what is useful to you. Use your D-Gun on the rest.

There is no need to build a base. The plant life provides a source for energy should you need it. The seas are unsafe - use the Atlas.

Move quickly, and capture the advanced radar tower on the mainland.

Capture the Atlas and use it to fly to the mainland. Capture the advanced radar tower. 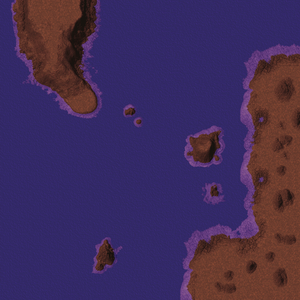 At some point almost every RTS eventually decides to try to be something else. This is that mission for the Core. This mission isn't about building the best force to assault the enemy base, it's about carefully making your way across the map with your Commander and capturing enemy structures along the way.

The Commander starts the mission taking fire from two Zeus KBots. Take them out quickly, or the Commander will have a harder time finishing the mission. To the east is a Wind Generator that should be captured, and then proceed south along the peninsula to locate and capture the Atlas.

Take the flight east to the large area along the edge of the map. Land in the northern part of this area and proceed slowly southward along the coast. Watch for two hammers guarding a second Wind Generator, and take them out quickly, capturing the Generator. Continue on to find another Wind Generator, guarded by two Zippers.

Next up is a KBot Lab, where you will find another Hammer and a PeeWee. You don't want to start building KBots at this point (you'll need the energy), but capture the Lab anyway. Continue along the coast and take out the LLT you'll find as the land curves westward.

The Advanced Radar Tower you need to capture is located to the south of the KBot Lab.