A major feature in The Sims 2: Nightlife are the new cars. They can be found in the miscellaneous section of the buy mode catalogue under the New Cars subheading. Other new objects are new party bars and the photo booth. This article reviews each of these objects.

The bars function the same way as they do in The Sims 2 as well as the new one in The Sims 2: University. Also the previously community-lot only bar from University is now available on residential lots.

Connects with The "Sometimes A Man Is An Island" Counter Island, by Fat City Counters island counter. 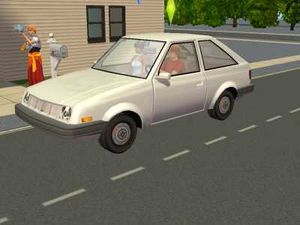 Sims can drive themselves to work, school and community lots and they can take other sims with them

Cars are a new category of object that can substitute for taxis, carpools and school buses. Each car must be placed on a driveway or a garage. Every car contains the same interactions.

Can be done anytime of day.

Go to top
← Hobbies | Miscellaneous | Other →