With The Sims 2 Nightlife comes new ways of increasing your sim's social life with Dates and Outings. It also comes with new relationship types. Now your sims can hold grudges, fight each other for someone's love and meet other sims through their friends. This article review each relationship type. 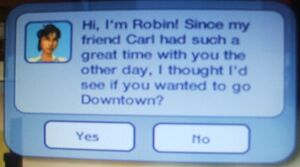 If you choose not to go, the contact will express his or her disappointment

After a scored outing or a date, your sim may receive a call from someone they do not know. This person however will be a friend of whoever was on the date or outing. Upon calling, your sim receives special benefits.

This is how contacts are marked in the relationship panel

Firstly, that sim is added to the relationship panel. However unlike normal portraits, the face will be covered with a light blue haze. Next, your sim's daily and lifetime relationship with that sim is increased, making it easier to achieve friendship level when the contact period ends. Your sim will also be friends with the other sim for the duration of the contact period.

This is useful for career promotions because they can provide a boost while you need the promotion. Sims don't get demoted for losing friends. That way you won't have to keep friendship stable after you have the promotion.

Finally, when receiving the call, your sim is invited on an outing with the contact. If you accept, your sim takes a taxi to a community lot for a scored outing. If the sim isn't in a group, the group will be casual and consist of the mutual friend and a number of downtownies. If they are part of a group, then the group members will be the same as stated in that group.

Rivals are not a viewable relationship type and for it to occur, there must be three sims on the lot. Sim A and Sim C refer to different rivals and Sim B is the sim, the other sims are fighting over.

If you receive this reply after a fight, then you know the loser is a rival

There are three ways to get rid of a rival

Previously, Sims could not hold grudges. If a sim was cheated on, all that happened was the lowering of the relationship score. It took a lot of effort to repair. Now, when sims get furious, the relationship repairs itself over time. The following table lists actions that can make sims furious. The number is subtracted from both daily and lifetime relationship. The duration number is in sim hours. 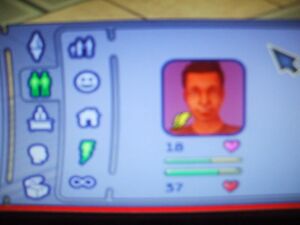 This is how you know a sim is furious. Note that fury doesn't affect chemistry

You can tell a sim is furious by selecting the relationships panel. Any sim whose portrait is coloured with a red haze made the sim furious. Over time, the red colour retreats anticlockwise. When there's no red left, your sim isn't furious anymore. During the fury period if the offending sim does another fury provoking act, what happens depends on how strong the act was. If it was stronger, then it replaces the original fury act and the red starts at the top again. If it's weaker then it is ignored. When a sim is furious, there are several negative effects. 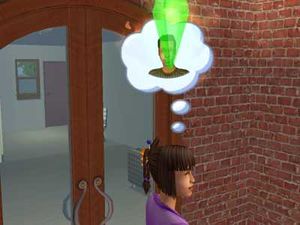 Sims think of the sims they hate regularly 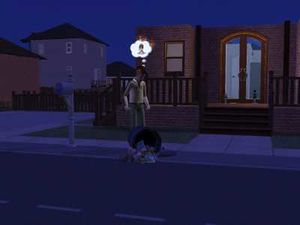