The spaceport door to the docking bay is in the northwest corner of Anchorhead. There are a number of Duros miners and Anchorhead tradesmen around:

The tradesmen comments on significant events on other planets resulting from your actions:

Travel southeast from the spaceport along Anchorhead's main thoroughfare, and once you pass a ronto (a giraffe-like creature) on your left you'll see the door to the Hunting Lodge in the north wall.

You can speak to Sharina Fizark, a human female standing to the right of the hunting lodge:

Any of those responses now or in the future end the dialog at any time. Otherwise:

If you're not willing or able to pay her anything, you can persuade her to let you take it and sell it for her:

This is the incredibly dense bone skull plate of a Tatooine desert wraid.

You can only sell it to Fazza Utral in the Hunting Lodge for 500 credits, and then only after getting a hunting license from the Czerka Office in exchange for agreeing to help stop the Sand People from attacking their interests:

You can just take the plate to move closer to the dark side (and the closest if you use the Force), and receive some experience:

If you persuaded her to let you take it and then sold it, you move closer to the dark side of the Force and receive more experience for giving her nothing:

Your receive the same experience for persuading her to accept half the asking price to move closer to the dark side (more so if you use the Force):

You receive no experience if you simply tell her that's how it's going to be after persuading her to let you take it and then selling it:

Believe it or not, this may be the only chance to move closer to the light side of the Force on this entire planet (you can also do so by speaking to Mission after reuniting her with her brother, but you don't need to be on Tatooine when this happens).

To the south of the Hunting Lodge is the door to the Czerka Office in the east wall: you need to enter and agree to help stop the Sand People from attacking their interests to get the hunting license which allows you to leave Anchorhead and enter the Dune Sea to the southeast.

To the right of this door is a footlocker with random contents, and a working sandcrawler mechanic who can be asked questions about his job, Tatooine and Anchorhead:

You can also take exception to him asking you to make it quick:

You can force him never to speak to you again to move even closer to the dark side of the Force:

Alternatively, you can persuade him to give you a few credits, or do likewise by continuing to threaten him or by using the Force to move closer to the dark side:

If you used the Force you can still ask questions, otherwise:

Once you've encountered the messenger Malare after speaking to Bastila, an agitated Duros named Maana Demknot awaits you outside the Czerka office:

So the cause of his agitation can be found in the Cantina to the southeast...

After encountering Calo Nord and finding the Star Map in the Eastern Dune Sea, you'll be approached by the Twi'lek Senni Vek as you turn the corner to the south of the Czerka Office and to the west of swoop registration. Otherwise, as you travel south and then east along Anchorhead's main thoroughfare you'll encounter citizens of Anchorhead, Twi'lek Czerka trading officers and Jawas:

As you travel east you'll come to a hairpin bend with the door to Swoop Registration in its south wall. When you turn northeast, you'll see a trio of dark Jedi waiting for you. They'll challenge you and engage in combat when you try to pass them, but you and any party can prepare before doing so:

They receive bonuses depending on your character level:

The dark Jedi in the middle who spoke to you is a Jedi Guardian, while that to the left is a Jedi Consular and the other to the right is a Jedi Sentinel: it's advisable to focus on each of them in turn. Although this may be your first encounter with multiple Force users, unlike against Juhani you don't have to combat them alone. 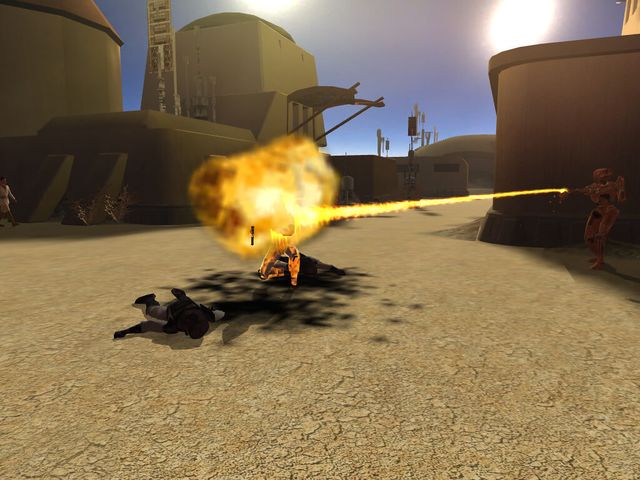 Strange but true: your loyal droid HK-47 is actually darker than your dark Jedi foes... even after he's incinerated them on a desert world with two suns.

The datapad makes it clear that Calo Nord isn't the only one hunting you for Darth Malak:

This datapad contains detailed descriptions of you and Bastila. It also has a brief message:

Bastila has escaped Taris. Whoever can find and dispose of her and her Jedi companion will be greatly rewarded by Lord Malak himself.

Travel east from Swoop Registration along the main thoroughfare until it turns north, and you'll see the door to the Anchorhead Cantina in the south wall with another ronto standing just beyond it in the southeast corner.

Travel north from the cantina and the main thoroughfare opens onto the southwest corner of a large square at the east end of Anchorhead. Across the square you'll see the door to the Droid Shop in its north wall, with a utility droid to the right of it:

HK-47 can be purchased within, although this is only necessary for a peaceful solution to the Sand People raids.

A huge gate at the east end of Anchorhead separates it from the Dune Sea beyond. Gate guard Billan stands before it:

Regardless of how persuasive you can be, even with the Force, he cannot unlock the gate without authorization:

Threatening him moves you closer to the dark side of the Force, but has no other effect beyond restricting his dialog to the purely functional:

You need to go to the Czerka Office to the northwest and agree to help stop the Sand People from attacking their interests to get the hunting license which allows you to leave Anchorhead:

You're now free to enter the Dune Sea.

A Jawa named Iziz stands to the left of the gate, in the northeast corner:

If you ask for his help looking for the Star Map, either during the first dialog or upon returning:

Travel south through the Dune Sea and Sand People Territory, and you'll find his tribe members in an enclosure on the east side of the Sand People Enclave. If you speak to him after their release:

You can ask him to give more, even after receiving your reward:

He can be persuaded, but you move closer to the dark side if you use the Force:

Threatening him also moves you closer to the dark side of the Force:

Now if you ask for his help looking for the Star Map, he'll give you a map of the Eastern Dune Sea if you haven't already received one from the Sand People chieftain:

He'll even do so after being threatened:

By showing how to interpret ancient marker stones, this map can be used to find a safe route through the Eastern Dune Sea. Only intimate local knowledge could take the place of such a document.

You can now enter the Eastern Dune Sea from the Dune Sea or Sand People Territory, if you couldn't already do so.