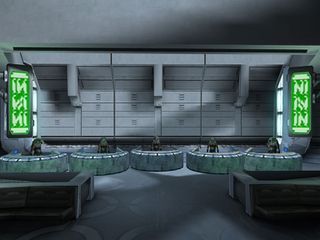 Judge Shelkar in the center presides over the Ahto High Court with, from right to left, Judges Jhosa, Naleshekan, Kota and Duula: you'll be seeing a lot of these guys…

If you've returned from the Upper Shadowlands after Jolee Bindo joined your party on Kashyyyk, a woman named Elora awaits you as you enter the Ahto West courtyard. If Jolee is not currently in your party:

If Jolee is currently in your party:

Go to the Ahto High Court to the south and speak to judge Shelkar to be appointed Arbiter in this case: you can do this without speaking to Elora with Jolee in your party, but you won't be able to question her until you've done so (although this isn't necessary, since you can speak to Sunry instead).

What is necessary (or at least highly recommended) is at a bare minimum to speak to Gonto Vas and then Elora or Sunry in this courtyard, and ideally investigate the crime scene and Republic Embassy in the East Central courtyard to receive much more experience:

Overall, in excess of 3000 XP can be received, and a proper investigation makes it easier to convince the court of Sunry's innocence, and possibly even get the Sith sanctioned for their actions for slightly more experience.

It saves time to investigate before infiltrating the Sith base on your mission for the Republic, then begin the trial after exiting the base and being arrested, brought back to Ahto High Court and released here following the successful outcome of your own trial... or, you could wait until after the second one (you can get into a lot of trouble here; just try not to get sentenced to death or banished, because the only reason Sunry might not be left hanging is because they electrocute people on this planet).

Once you have been appointed Arbiter by the Ahto High Court, you can return to question Elora about her husband:

However, this isn't necessary until you've learned about Sunry's alleged affair with the victim. Ask the Pazaak player Gonto Vas in the mercenary enclave about the recent murder and he'll tell you about it if you ask him:

You can also hear the rumors if you investigate the crime scene, the visitor's hotel in the East Central courtyard, and ask Ignus the proprietor or Firith Me the Pazaak player about Sunry and Elassa. You could then ask Elora about this:

However, the same experience is received if Sunry confesses to the affair instead, and he can always be persuaded to do so (after which Elora will just tell you about Sunry and Elassa when asked).

Once you've been appointed Arbiter by the Ahto High Court, the guard will unlock the door to Ahto City Prison after you speak to him.

Once inside, there's a prisoner caged in the northwest corner. If you speak to him:

Sunry is caged in the southeast corner, between the door and the Selkath warden.

Let's find out what he has to say for himself...

After accessing the Republic Embassy's computer room in the East Central courtyard and slicing the Republic's system to access its restricted data archives, you can confront Sunry with the evidence of his guilt and move closer to the dark side of the Force by trying to use to the Force to get him to confess:

You can also move closer to the dark side of the Force by agreeing to keep his secret:

The Selkath warden stands behind a counter in the south wall. However, speaking to him isn't necessary until you want to begin the trial:

The quickest way to end the trial is to present the data recording of Sunry killing Elassa to the court, proving his guilt beyond reasonable doubt but resulting in his summary execution:

Otherwise the trial will proceed with the witnesses and cross-examinations, even if you plead guilty based on Sunry's confession to you when confronted with the data recording, or try to use the Force to persuade the court to find him innocent:

Once you have no additional questions for each witness, you'll be given the opportunity to poll the judges to give some indication of how your defense is faring:

The trial concludes with the closing statements of the prosecution and defense:

Whether Sunry is found guilty or innocent depends on the extent of your investigation before the trial, the questions you ask the witnesses during it and the statements you make at its conclusion.

If you speak to none of the witnesses before beginning the trial, the only possible outcome is a guilty verdict:

This is the worst outcome in terms of experience received, particularly due to the length of the trial, so it's much better to do the leg work necessary for an innocent verdict and receive much more experience for doing so.

This is the second best outcome in terms of experience received and equivalent to that received from an innocent verdict, but defending Sunry gives you an opportunity to receive slightly more (100 XP) and you move no closer to the dark side of the Force for condemning him to death (so this isn't recommended unless role-playing a dark side, or possibly just lawful, character).

An innocent verdict requires you to score at least three points with at least three of the judges. The bare minimum necessary for this is to get Elora or Sunry to admit to the affair with Elassa before beginning the trial, then ask or state the following during it:

Judges Kota, Shelkar and Jhosa will still find Sunry innocent if you miss one of these questions, but you must ask Elora if it's true her husband was having an affair with Elassa. Although you may gain Judge Duula if you suggest more than once that Sunry couldn't have killed her because he's a cripple, you'll lose Judges Shelkar and Jhosa:

The remaining options can actually make it even harder to convince Judges Duula and Naleshekan of Sunry's innocence, and risk losing one of the other three:

If you don't get Elora or Sunry to admit to the affair before the trial, an innocent verdict is still possible if you don't lose too many points with the judges and thoroughly investigate the crime scene in the visitor's hotel of the East Central courtyard, as this gives you more options to counter this damaging revelation during the trial:

You actually have more leeway than if you ignore the visitor's hotel altogether and rely solely on the admission of the affair before the trial.

However, the best possible outcome requires you to score at least three points with all five judges, which is impossible without both the admission of the affair and the investigation of the visitor's hotel before the trial. The maximum points achievable with each judge without losing points with others are as follows:

You have the least leeway with Judge Naleshekan, as you can gain points with Judge Duula at the expense of Judges Shelkar and Jhosa.

Once the trial is over, if you speak to Judge Shelkar again:

The Selkath guard also remains in the court:

If you did as recommended and completed this trial after infiltrating the Sith base on your mission for the Republic and concluding your own trial, then it's time to return to the Republic Embassy and access the submersible which can take you down to Hrakert Station...