Use the Sonic Emitter immediately upon exiting the pressure door from Kolto Control: the Firaxa swimming away to the left isn't an immediate threat, but it is within range. Another Firaxa approaches from the right.

Mission for the Republic[edit]

Ignore the pressure door in the north wall to the left for now, and go down the trench to the east on the right.

On the left side of the trench by its north wall is the kolto control panel, with the fuel injector pod to its left and the container pod to its right. There's a bridge over the Hrakert Rift itself to the east, beyond which a huge sea beast can be seen looming over the Star Map. Do not approach until you've used the control panel to poison it or destroy the harvesting machine. It's easiest to feed toxin into the vents, although this results in you moving closer to the dark side of the Force when you report it to Roland Wann:

However, it's almost as easy to access fuel tank pressure control and overload the fuel tanks, and aside from receiving more experience it's also much easier not to be banned from the planet when you return to the surface:

If you try to use the control panel again:

As you cross the Hrakert Rift, you'll now see the sea beast floating to the south, clearing the path to the Star Map. If it's still alive:

[Now that the kolto harvesting machine has been destroyed, the great Firaxan shows no signs of hostility. It allows you to pass.]

The Star Map is at the east end of the trench, on the other side of the Hrakert Rift.

Return to the west end of the trench. 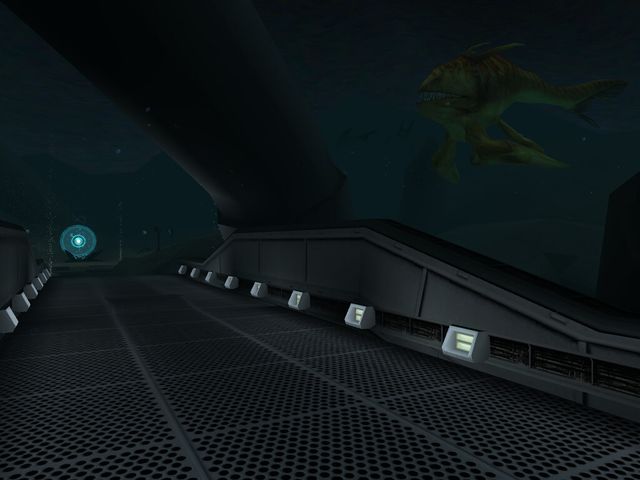 One last look back at the Star Map, and the sea beast floating over the Hrakert Rift.

Beyond the pressure door in the north wall at the west end of the trench is the east airlock at the south end of Hrakert station's East Hallway B, where any party left at the west or central airlock will rejoin you.

Head north along the hallway, and as you exit Security Control to the west you may encounter Calo Nord if you haven't already done so since escaping Taris; Darth Bandon may be similarly encountered here after finding your third Star Map.

If you speak to him again, you can ask for a bribe to move closer to the dark side of the Force... and you can do so repeatedly:

Before opening the door to leave the Republic Embassy, save game. Selkath officers are lying in wait to arrest you, and you can be banned from the planet if you make a mistake during your trial:

Trying to persuade them using the Force never works, and using it a second time is the quickest way to be banned from the planet:

Lying to them by trying to blame the Sith for what happened is a more convoluted way of doing so:

Rather than continuing to lie or feigning ignorance, you can admit to it and then start telling the truth (as you should do from the start):

It's still possible to be banned:

If you are banned:

You're returned to the cockpit of the Ebon Hawk. Although you can still dock on Manaan, the door to the docking bay is locked and cannot be opened:

However, this isn't a foregone conclusion...

If you destroyed the machinery then telling them about the giant firaxan shark at any point allows you to retain the freedom of the city:

The next time you return to the West Central courtyard from the docking bay, if you speak to the Port Official then he tells you the docking fee is now 500 credits:

However, the door to the courtyard is still open, so ignore this.

However, telling them about the giant firaxan shark if you killed it will also result in being banned:

There's only one sequence of responses that allows you to retain the freedom of the city:

Although you go unpunished, there are consequences. The cost of all Antidote Kits and Medpacs trebles throughout the galaxy: on the up side, this means they can now be sold on the Yavin Station for almost twice what they cost to buy beforehand (100*3 * 65/100 = 195%). If only you could go back in time to stockpile them...

Further, the Republic Hiring Mercenaries and Missing Selkath quests can no longer be activated or completed because the Selkath Nilko Bwaas and Shaelas won't talk to you. Finally, the next time you try to return to the West Central courtyard from the docking bay, the door will be locked again and the Port Official tells you the docking fee is now 500 credits:

However, as before it's easy to persuade him you don't need to pay it at all by using the Force.

If you speak to Judge Shelkar again after being released, regardless of your actions in the Hrakert Rift: