While wearing an Envirosuit you move quite slowly, so you'll want to minimize the distance traveled: although both the central and west Airlocks from Hrakert Station are equidistant from where you need to go, if you want the contents of a footlocker in the southeast corner of an alcove at the east end of the submerged hallway beyond them then exit the central airlock and turn east, continuing past a welded door in the south wall.

[This door has been welded shut.]

Return west until you encounter a survivor at a T-junction, or exit the west airlock and turn east until you do likewise.

When you follow him to the south, you'll find him standing just outside a breach in the southwest wall. As you approach he's so anxious to keep moving that he doesn't notice the danger until it's too late:

He's carried off by a firaxan shark. You'll suffer a similar fate unless you have a Sonic Emitter from the central or west storage room in Hrakert Station: you cannot run away fast enough, attack or use Force powers, and a bite is instant death.

You only have to worry about the Firaxa in the trench to the east, not those swimming in the distance to the south. Don't use the emitter when you can first target them, but wait until you're close enough for them to notice you and start making an attack run: use it in the same way you would activate a non-medical item like a shield or stimulant. 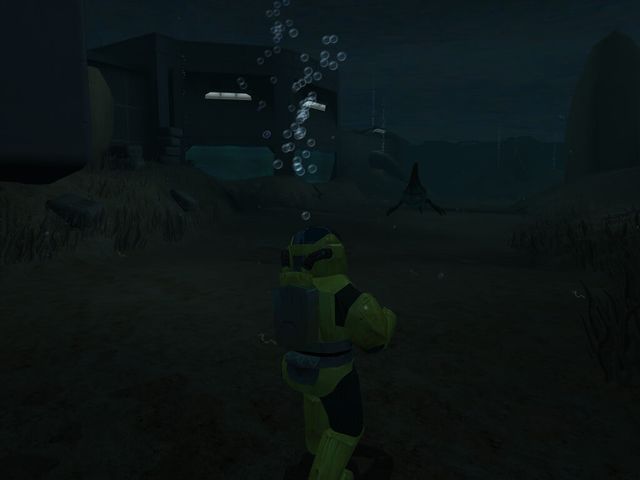 Once a Firaxa notices you and attacks, it is within range of the Sonic Emitter: if you didn't have one, all you could do would be put up your dukes, and die...

You'll encounter two Firaxa as you move east, and another two at a fork ahead: directly before the fork there's also one lurking behind the windows to the north, which can be avoided by keeping to the south side of the trench while killing the remaining Firaxa, then attacked through the broken right window.

To the north of the broken window is the welded door, while in the northwest corner there's a footlocker: