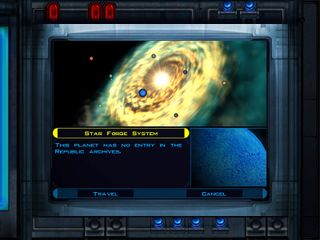 Quest for the Star Forge[edit]

After acquiring the fifth and final Star Map, the Star Forge System is added to the Ebon Hawk's Galaxy Map: traveling here prevents you from returning to any other world, so any remaining active quests should be completed before doing so, as should any purchases or other acquisitions. Henceforth nothing can be bought or sold, so spend as many credits as you can before traveling: if nothing else, you can stock up on utility items like Computer Spikes.

Meanwhile, Darth Malak is torturing Bastila to turn her to the dark side:

After exiting hyperspace, you've confronted with the sight of the Star Forge over a planet, and the Sith fleet:

After taking out those fighters, Carth alerts you to more problems:

Carth manages to land the damaged Ebon Hawk on a secluded beach, and the crew gather at its hub:

After acquiring the fifth and final Star Map, a female character who romanced Carth can finally talk about being Revan:

Any of those responses completes this quest prematurely. Otherwise:

This dialog must be completed before entering the Temple of the Ancients, otherwise it becomes unavailable and the romance ends afterwards without a proper climax back on the Central Beach, or the Star Forge.

Trapped on a Nameless World[edit]

The crew remain gathered at the hub of the Ebon Hawk. If you check the hyperdrive in the engine room to the south:

[The hyperdrive is non-functional. Critical components have been damaged.]

If you try to approach the cockpit to the north, Carth will stop you:

Even if you do get to the cockpit later, if you try to use the Galaxy Map before finding a way to disable the disruptor field:

[Before you can leave this planet you will have to find some way to disable the disruptor field that caused you to crash in the first place.]

You can ask some other party members if they know anything about this world: