[Until you have talked with the Jedi Council, you will be unable to switch characters in and out of the party.]

Bastila leaves and Carth follows, down a ramp to a tunnel exiting the docking bay to the north, leading to the Jedi Council Chambers. If you don't follow immediately, you can look around the docking bay first. If you try to speak to any security droid:

There's also a protocol droid, and male and female Jedi who can comment but don't engage in dialog:

Beyond the east door in the northeast corner is the Aratech Mercantile store.

Lur Arka Sulas, a green Twi'lek male, stands to the left at the top of the ramp down to the north exit tunnel. If spoken to, he will ask you about a kidnapped girl called Sasha:

You may also encounter a messenger for a party member if unlocked by dialog:

As you go down the ramp to the tunnel exiting the docking bay to the north, you'll see Deesra, a green Twi'lek male Jedi, to the left at its base. If you're following Bastila and Carth then you'll lose sight of them if you stop to speak to him:

The north tunnel turns east, then north again, before exiting into a small courtyard. The first time you enter, a human female Jedi on the left named Belaya challenges you:

You may have lost sight of Bastila and Carth (if you hadn't already), or depending on the camera angle you may have seen them exit the courtyard to the west as you spoke to Belaya. Do likewise and you'll see Carth waiting for you to the left when you reach the T-junction; to the right is a door to the training room:

The Council chambers are behind him to the southwest, through the west archway. 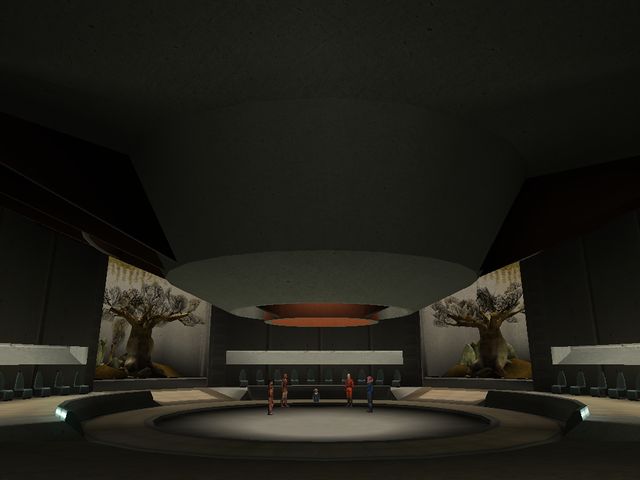 Bastila to the left of the four Masters of the Jedi Council of Dantooine. From left to right: Master Dorak, Master Vandar Tokare, Master Vrook Lamar and Master Zhar Lestin.

As you approach, they will speak to you:

Afterwards you automatically return to the Ebon Hawk to sleep, when you have another dream or vision. Revan is pacing in front of a closed door in an ancient ruin, when Malak begins voicing his misgivings:

Revan opens the door, and Malak follows him through it into the chamber beyond...

The next morning, Carth informs you that Bastila had already left, and mentioned that you should also return to the Council chambers:

You are now able to change party selection again.

When you return to the Council chambers, they'll once again speak to you as you approach. You can move closer to the dark side of the Force if you lie or express selfish concern for your own safety:

The obligatory montage now plays as you're trained in the ways of the ancient Jedi Order in the courtyard and Council chambers by Master Zhar Lestin with Bastila's assistance:

It ends with you speaking to Zhar Lestin in the training room:

You can speak to him again to begin the first trial, or if you did so already instead of questioning him about Revan and Malak, you can question him now. Otherwise, this is your first opportunity to exit the training room through its south archway and speak to the masters of the Jedi Council individually in the Council chambers beyond. You cannot speak to Bastila at this point:

Master Dorak is the chronicler of the Academy, and he can share the recent history of the Jedi order with you, namely the Mandalorian Wars, the fall of Revan and Malak, and the rise of the Sith:

If you return after hearing the complete history:

Later you can also seek knowledge of the Jedi Code during your first trial, from all three masters in the Council chambers.

Master Vandar Tokare can also be asked about Revan and Malak, as well as Bastila, and Master Vrook Lamar's apparent dislike for you. Later you can also ask him about the Mandalorian Raiders:

Finally, Master Vrook Lamar can also be asked about Revan and Malak, as well as Bastila, and his apparent displeasure with, and criticism of, you. Later you can also ask him about the Mandalorian raiders:

You don't need to speak to them now, and you can still do so at a later stage.

At this point, a number of quest items left over from Taris will be removed from your inventory. You can seek knowledge of the Jedi Code from any of the other three masters in the Jedi Council chambers through the archway to the south:

You can also learn it from the Jedi Belaya or Deesra:

Once you've learned it, return to Master Zhar in the training room to the north of the Council chambers:

The first dialog repeats itself, until you reach this point:

If you make a mistake, Master Zhar will stop you:

You'll need to start again, and repeat until you get it all right:

Master Dorak awaits you in the Jedi Council chambers through the archway to the south.

Before speaking to Master Dorak, save game: this is your last opportunity to level up as your starting class, and you may change your mind later. You may also want to use the training computer in the southeast corner for a training orientation about the three Jedi classes:

When you're ready, go and speak to Master Dorak:

Although the answers to his four questions inform his own recommendation, and may influence your choice of Jedi class if you're still undecided, you're free to choose any class at this point (although do not make the choice based on crystal color, as this isn't at all permanent).

You also receive enough experience to level up, and you must do so now. So even if you haven't been saving any levels, you will gain at least one as your Jedi class.

Return to the training room to speak to Master Zhar:

You automatically walk to the workbench in the southwest corner to assemble your lightsaber:

Speak to Master Zhar again to learn more about lightsabers and their crystals:

Although you can end the dialog here, you need to complete it before the Council decrees you may come and go as you please, allowing you to leave the Jedi enclave to face your third and final trial. The only thing you can do at this point that you couldn't before is tell the Jedi Belaya or Deesra you're looking for crystals to alter your lightsaber, but neither has anything to add to what Master Zhar has just told you about the Crystal Cave:

Now you can finally leave the enclave...

You can now exit the enclave and travel to the southeast through the plains outside the courtyard and across the Matale grounds to find the tainted grove beyond.

To the east from the courtyard outside the Jedi Council Chambers is the enclave exit to the outer Courtyard, with a Jedi droid standing to the left. If you try to open the door before beginning your third trial, you'll find it locked. If you speak to the droid:

The Council has decreed you must not leave the enclave. Please return to your room.

Once you have begun your third trial, speak to the droid to open the door:

The Council has decreed you may come and go as you please.

Where your room is, or even if you have one, isn't specified, but if you exit the courtyard to the north then the tunnel turns west and there are three doors in the south wall. Beyond the right door is a room occupied by Ahlan Matale, who does not want to be bothered, while beyond the middle door is an unoccupied room, with a footlocker at the base of the bed:

Beyond the left door is a room occupied by Sol'aa, an orange Tw'lek male Pazaak player and card seller. If you already have a Pazaak deck:

If you don't, then you can buy one:

You can play, or buy cards for your side deck:

Beyond the east door in the northeast corner of the docking bay is the Aratech Mercantile store. The proprietors are two green Twi'lek males assisted by two protocol droids, both of which are sorry to be unable to render assistance to you at this time (or any time, as it turns out):

Crattis Yurkal is closer on the left, and will speak (at length) about the evils of the Czerka Corporation. Later you can also ask him (and Karal) about the Mandalorian Raiders:

Karal Kaar stands further back, and is much less talkative: