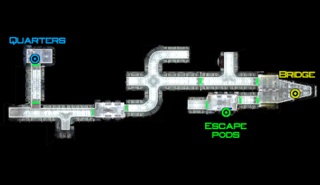 Map of the command module of the Endar Spire

In the skies above the Outer Rim world of Taris, a Jedi battle fleet engages the forces of Darth Malak in a desperate effort to halt the Sith's galactic domination...

As the opening crawl ends, a cutscene begins in which a Republic ship orbiting Taris is under attack by Sith fighters. Within this ship, you're awoken in your quarters by the resulting explosions and alarms, just before the door opens and an ensign of the Republic Fleet runs in and begins speaking to you.

Trask tells you to grab your gear, and how to get your equipment from the footlocker by the north wall of your quarters:

As this opening dialog ends you gain control of your character for the first time, and can begin this tutorial in earnest. The contents of the footlocker vary depending on your starting class:

The footlocker also contains a Stealth Field Generator if you spent any points in Stealth.

Trask tells you to put on your equipment, and how to do so:

Trask tells you how to use him to unlock the door in the south wall of your quarters, by making him party leader:

Through the door in the south wall of your quarters is a short corridor containing a utility droid.

Before you can speak to it, you receive a message, after which Trask can tell you how to use your journal:

The door at the south end of the corridor is locked:

Trask tells how you or he can use Security to open it:

He can also tell you more about the target and action menus:

Once the door is open, a cutscene plays in which a Republic soldier is killed by two Sith soldiers outside.

The nearest Sith soldier on the left only has 1 Vitality, so kill him quickly and then focus on the remaining.

If either you or Trask take any damage, or you speak to him after this, he can tell you how to use a Medpac:

However, do not bother healing while in the command module, because once you and Trask are reduced to 1 Vitality you will remain conscious and take no further damage. You cannot be killed (yet)!

The door at the east end of the corridor remains locked until both are killed, and leads to a small room with another two Sith soldiers.

Search the Republic soldier remains just inside the entrance to the right, the footlocker further along the south wall and the metal box against the north wall.

You should also search the remains of those killed when they're left behind at random.

Opening the east door triggers a cutscene of a battle at a junction round the corner to the north, which ends when one of the three surviving Sith soldiers throws a Frag Grenade to kill the last two Republic soldiers (and one Sith soldier: bear this in mind when using them yourself). Once this ends, the door has locked behind you.

After turning the corner, these three Sith must be killed before the door at the end of the east corridor to your right can be opened. They're identical to the first Sith you encountered, and the quickest way to kill them is to follow their example and throw a Frag Grenade at the middle Sith soldier: there's 72.9% it will kill all three outright, and any that survive will be reduced from 15 to 5 Vitality. If you want to conserve grenades then killing them from range is advisable...

...since when you approach the junction, two reinforcements come running around the corner from the north corridor. These two are identical to the Sith in your second encounter except each has a Medpac in their inventory, which they'll use when reduced to less than 50% Vitality, so you and Trask should focus on one at a time.

Head north and follow the corridor round the corner to the east to find a cul-de-sac with a utility droid and a parts pile at the end of it. As you approach it the utility droid will explode, but search the parts pile before turning back:

After returning to the junction and turning east, you'll hear the sounds of a lightsaber battle as you approach the door at the end of the corridor. Opening the door triggers a cutscene of this battle between a Jedi and a Sith apprentice.

Although the Jedi defeats the Sith apprentice, she's killed by a subsequent explosion.

Before you can search the Jedi's remains, two Sith soldiers run around the corner of the intersection ahead from the cul-de-sac to the north; they're identical to the Sith in your second encounter, except the one on the left has 13 Vitality and once again each has a Medpac they'll use when reduced to less than 50% Vitality.

If you approach and try to open the door to the bridge at the end of the corridor to the east of the intersection while equipping a Blaster Pistol or Blaster Rifle, Trask will interject:

Open the door to be confronted with two Sith soldiers, each armed with a Vibroblade:

Experience is also received when any of the surviving two Sith soldiers fighting two Republic soldiers on the bridge itself are killed by explosions, although this is not recorded in Feedback. There's also a backpack in the right corner just inside the entrance.

The entrance to the bridge now closes and locks if you're inside.

The exit to the bridge is to the south in the west wall, but when you try to open it you may find it locked:

If you don't have enough experience points (XP) for level 2, it will be increased to 1000 to achieve this. However, you'd have 1275 XP if you'd killed all Sith soldiers rather than running past some of them.

Once you level up, the exit to the bridge can be opened. When you open the subsequent door, it locks behind you after a cutscene, as Trask runs into the room ahead of you:

He opens the door at the back of the room to the west, revealing the first glimpse of a Dark Jedi who will become familiar to you...

Trask has now left your party, never to return, but any items he equipped are automatically transferred to your inventory. The door locks behind him, leaving you no other option but to open the door in the south wall and enter the starboard section.

[Trask has bought you the time you need to escape. You should make your way to the Starboard Section of the ship.]